A metaphor expresses an idea by describing something that isn’t literally true. Most commonly, this involves comparing two things that aren't alike but do have something in common. You may have to work a little to find the meaning in a metaphor. 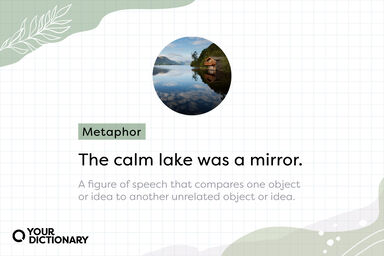 The animal kingdom is full of strange, wild creatures that can help you compare people, feelings and more. This list of simple metaphor examples for kids involves animals and is a great place to get started.

Nature offers a wealth of potential metaphors. For example, something as simple as “You are my sunshine” helps you describe the warmth that someone might make you feel, like the sun itself. Make note of the comparisons being made in these metaphors:

Going through your day, you’d be surprised how often metaphors come up. From the park to the grocery store, keep your ears open for people speaking in metaphors.

While simple metaphors make a direct comparison between two things, saying that one thing is the other, not all metaphors are as easy to understand. Implied metaphors don't directly state one of the objects being compared. Instead, they describe one item with the words you would typically use to describe another. For example:

By describing the girl this way, the writer is making an implied comparison between the girl and a lion or other predator. Implied metaphors can be difficult to figure out when you're first learning about them, but as you see more direct metaphor examples, you’ll work your metaphor muscles and have an easier time figuring out metaphors in all forms.

The Difference Between Similes and Metaphors

Similes are another way to compare two different things, but a simile uses the words like or as. For example:

A metaphor makes the same comparison without like or as, which can require a little more interpretation from the reader:

Metaphors help you make a point in a more interesting way and help others see something from a new perspective. Combining metaphors with other figures of speech make writing and conversations more fun for everyone.