What is a metaphor? Simply put, a metaphor is a figure of speech containing an implied comparison. With metaphors, words or phrases that are ordinarily applied to one type of item or concept are applied to something that is not ordinarily associated with that terminology. Explore metaphor examples to better understand the meaning and purpose of this literary term. 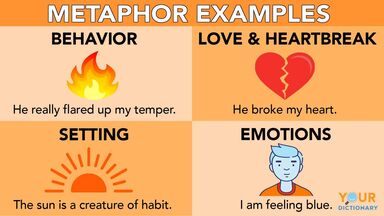 Metaphors are figures of speech that are not true in a literal way. They're not lies or errors, though, because metaphors are not intended to be interpreted literally. They are a type of figurative language intended to convey a different meaning than the literal denotative meaning of the word or phrases used. They are used in creative writing like poems and novels, as well as other types of writing, speeches and ordinary conversations.

Metaphors are used in communication to help illustrate or explain something by comparing it to something else. Metaphors serve several functions:

Metaphors are illustrations that make a strong point by comparing two things you wouldn't necessarily pair together.

Metaphors can be useful in expressing the extent or type of feelings a person is experiencing.

Metaphors About Love and Heartbreak

Conversations about love and loss are often filled with metaphors.

Sometimes a metaphor is the best way to convey what the setting is like.

Some popular sayings (clichés) are metaphors.

From elementary school children to professional authors and public speakers, everyone needs to understand what metaphors are and how they can be used to enhance written and spoken communication. There are many metaphor examples for kids that can help young learners understand and discover how to use metaphors. Expand your knowledge by discovering the difference between metaphor, analogy and simile. Then, it's time to make sure you understand the difference between idiom vs. metaphor.