The Middle Ages time period is named for its placement in history between the fall of the Roman Empire and the beginning of the European Renaissance. Lasting roughly 1,000 years from the 5th century to the 16th century, the Middle Ages was a pivotal time for religion, politics, science, literature, and human innovation. Take a look at the major events and movements of civilization during the Early Middle Ages, the High Middle Ages and the Late Middle Ages. 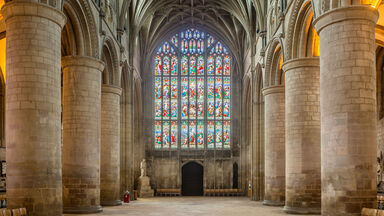 The Early Middle Ages, also known as Late Antiquity, began when with the fall of the Roman Empire in the 5th century and ended around the 10th century. It was a transitional period from Classical Antiquity in the ancient Greco-Roman world. Despite being termed the Dark Ages by 18th-century scholars, the Early Middle Ages saw the rise of Islam, the expanse of higher education and the beginning of the Holy Roman Empire.

Founding and Spread of Islam

Islam, the second-largest world religion after Christianity, started in Mecca with the prophet Muhammad in A.D. 613. He recited his revelations from Allah to his followers and traveled to Medina during the first Hijra in 622 to spread the message of Islam. Seven years later, in December 629, Muhammad and other Muslims took the city of Mecca by force. After his death in 632, the al-khulafā' ar-rāshidūn (the first four caliphs or leaders, known as the Rightly Guided Caliphs) expanded the Muslim territory into most of the Middle East. Baghdad was founded in 762 as the capital city of the Islamic Empire.

Advances in Math, Science and Philosophy

The rise of Islam directly contributed to the progress of math and science during the Early Middle Ages. Both Muhammad and the Quran emphasized the importance of education and investing in patronage for scholars. Islam's focus on knowledge led to the Islamic Golden Age (8th-14th centuries), a period of major scientific and economic advances, during this period. Some major Islamic figures during the Early Middle Ages included Muhammad ibn Musa al-Khwarizmi (A.D. 780-850; "father of algebra"), Ibn Sina (A.D. 980-1037; the "father of modern medicine") and Ibn al-Haytham (A.D. 965-1040; founder of the scientific method and the field of optics).

Beginning of the Holy Roman Empire

There was no central political power that would rule the territories of Europe after the fall of the Roman Empire. As the Romans had spread Christianity throughout their empire, many brand new countries turned to the Church to rule them. Most European monarchies had strong political alliances to the Church, which gathered money and power throughout this period. Charlemagne was crowned Emperor of the Romans in A.D. 800, beginning a long line of Holy Roman Emperors that wouldn't end until the empire's dissolution in 1806.

This period is also known as the Dark Ages in European history. The primary reason is that there is not much recorded history in this time, so our knowledge of the period is "dark" compared to what we know of ancient Greece and Rome. Additionally, European historians believed that there were fewer notable leaders and less intellectual progress than in the "lighter" era of the Roman Empire and that the period represented a decline in human civilization. However, modern scholars have a more thorough knowledge of the Early Middle Ages and don't typically describe the time period as the Dark Ages anymore.

The political climate changed significantly in the 11th century. Both the Holy Roman Empire (in the West) and the Byzantine Empire (in the East) were vying for control over Europe and the Middle East, leading to the Crusades. Adding to this struggle came Genghis Khan and the Mongol Empire from Asia. Within Europe, the feudal system was beginning to take hold — though the Magna Carta would limit the powers of a king.

The Crusades were a series of holy wars between the Christians and the Muslims during the High Middle Ages. Christianity and the Holy Roman Empire were just starting to take shape as Islam spread, leading to violent clashes over possession of the Holy Land. Heads of state throughout Europe, including many popes and Holy Roman Emperors, organized these wars to varying degrees of success. The city of Jerusalem changed hands between Christians and Muslims several times during the Crusades until the fall of Acre, the last Christian-held city in the Holy Land.

Started by Genghis Khan in the 12th century, the Mongol Empire quickly became the largest contiguous empire in world history (11-12 million square miles of controlled territory). It was formed by several nomadic Mongolian tribes uniting for protection and power. Genghis Khan and his descendants were known for their vicious and murderous tactics. The Mongol Empire conquered most of Asia and the Middle East, including Turkmenistan, Afghanistan and Iran before falling to the Chinese Ming Dynasty in A.D. 1368.

Like in the Early Middle Ages, the monarchy held all the power during the High Middle Ages. The feudal system was designed to ease the monarch's burden of land ownership by delegating it to European Barons and lords. Barons and other high-ranking nobles were given large amounts of land (fiefs), which they divided up between lords. Lords then divided their allotment of land among peasants (serfs), who would tend the land for the lords in exchange for protection.

The Magna Carta was an English charter in A.D. 1215 that placed limits on King John and future royals of England. It was meant to prevent a rebellion from English Barons and to guarantee property rights for elite classes outside the monarchy. However, it was unsuccessful at first and went through several versions before making its way into English law. The anti-oppression Magna Carta was a source of inspiration for the American Declaration of Independence over 500 years later.

Not long after the end of the Crusades, the Hundred Years' War (A.D. 1337-1453) broke out in Europe between five monarchs in England and France. France's King Charles IV had died in 1328 without an heir; his nephew, Edward III, was King of England. The French throne therefore technically belonged to England, but France maintained that the King must be a native Frenchman. Over a century of wars and battles followed, featuring French hero Joan of Arc, and ending with a series of French victories that placed the throne back in French control.

The Great Famine and the Black Death

The population surge of the High Middle Ages came to a sudden stop with the twin humanitarian crises of the Great Famine (A.D. 1315-1317) and the Black Death (1346-1353). Devastating weather brought poor crops and livestock disease, leading to a famine that killed over 25% of the European population in two years.

Survivors of the famine soon found themselves immersed in the Black Death, a pandemic of bubonic plague that killed between 75-200 million people in Europe, Asia, the Middle East, and North Africa. This period also saw a striking rise in attacks against European Jews, who were blamed for the outbreak, culminating in the mass murder of thousands of Jews.

Johannes Gutenberg and the Printing Press

After the misery of the 14th century, the world was ready to move on. Johannes Gutenberg invented the printing press with moveable type in 1440, which could produce thousands of pages a day. This invention allowed writers, publishers and revolutionaries to reproduce and distribute their work quickly. It enabled languages to cross national borders, which diminished the importance and need for Latin as the language of published works.

The End of the Byzantine Empire

Byzantium came to an end with the fall of Constantinople in 1453. The power of the Byzantine Empire had been diminishing with the rise of Turkish forces and the Ottoman Empire, as well as with its own civil wars of A.D. 1321-1328 and 1341-1347. The Ottoman Empire annexed the rest of the Byzantine territories, ending 1,500 years of Roman rule in Eastern Europe. This move also gave the Ottomans more freedom to invade Europe during the Bulgarian-Ottoman wars, the Serbian-Ottoman wars and the Albanian-Turkish wars in the next few centuries.

So if the Middle Ages lasted from A.D. 500 to A.D. 1500, when was the medieval period? Medieval is an English word derived from the Latin medium aevum (which means "middle age.") The words refer to the same time period and essentially mean the same thing, but their main difference is:

So if you're talking about the time period, use Middle Ages or Medieval period. When you're referencing people, places or things from these years, you use the describing word medieval.

The Middle Chapter in History

While the Middle Ages are known for their in-between place in history, they are full of defining moments, historical heroes and world-changing events. To learn more about the Middle Ages, take a look at these common medieval words and terms that you may recognize today. Or if you'd like to keep going in the 15th century, check out a helpful timeline of the Renaissance era.