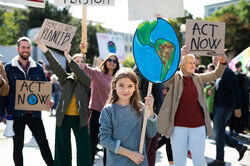 Many individuals and groups use acts of civil disobedience to challenge modern human rights concerns, such as student loan debt, racially motivated killings, and climate change. Successful acts serve as inspiration as do failed civil disobedience examples. From others, you can learn which strategies work and why.

Corinthian Colleges closed hundreds of their locations in 2015, leaving thousands of students with loan debt. Fifteen students originally banded together in 2015 and refused to repay their student loan debt to Corinthian.

Within months, their numbers grew into the hundreds, all refusing to pay their student loan debt to the college who had swindled them out of effective programming and job placements. In 2018, a judge ruled in favor of the students and issued a temporary ban on the U.S. Department of Education from collecting any student loan debt from Corinthian students.

In 2008, plans were submitted to build the Keystone XL pipeline. Local ranchers, farmers, and Native Americans whose land would be affected by the construction of this pipeline began to voice their opposition. First Nations leader Clayton Thomas Mueller was one of the first to help organize the effort.

Activist groups, such as 350.org, started by taking their concerns directly to President Obama. In 2011, activists gathered for a two-week protest where they sat in front of the White House. Another method employed by activists was the 24-hour call-ins where 800,000 messages were sent to the Senate.

In 2012, President Obama announced that he would not support the building of the pipeline, but others found ways around him. While many previous attempts to stop pipelines from being built were unsuccessful, this campaign did stop the Keystone XL pipeline from being built.

Thousands of women marched on the U.S. capital in 2017, on Donald Trump’s first day of presidency, to protest for women’s rights in the modern Women’s March. Simultaneous protests were held in cities around the world. Women wore pink hats meant to symbolize a crude comment by the President and voiced concerns about his views of women and other groups.

The initial Women’s March drew millions of participants and sparked the annual Women’s March, which has taken place every year since 2017. While the results of the marches are difficult to see, since 2017 there have been record numbers of women elected for government positions across the U.S. Also, landmark legislation regarding women’s reproductive rights are at the forefront of U.S. law debates.

In 2018, Swedish teenager Greta Thunberg took one small action that launched her into becoming Time’s Person of the Year in 2019. Thunberg became aware of scientist warnings about climate change and took a stand by skipping school in protest. She sat in front of the Swedish parliament striking from school for climate change.

Since that time, thousands of teenagers and adults have rallied behind Thunberg’s voice. While the school skipping protests were her calling card, Thunberg gained opportunities to speak to major world leaders. Her efforts brought the dangers of climate change into the forefront of discussions and directly resulted in actions like the U.K. passing a law to eliminate its carbon footprint.

Actress Jane Fonda, at age 81, got inspired by Greta Thunberg and started joining climate change protests in 2019. Fonda regularly participates in protests at the U.S. Capitol, calling for a large-scale reduction in the use of fossil fuels.

She has been arrested multiple times for her participation in peaceful protests, but shows no signs of stopping. Climate change is still a hot topic, but it’s too early to tell what impact Fonda’s efforts have on the cause. She has succeeded in motivating other senior citizens to protest too.

In 2018, after bread and fuel subsidies were cut, protesters in Sudan began calling for the removal of their ruler. The group vowed a campaign of civil disobedience in an effort to gain a more democratic government. The initial tactic was an occupation of the square near the military headquarters. This event resulted in the overthrowing of the president.

Even with new rule, protestors continued their efforts to gain a better standard of living for the people. In successive protests, the military opened fire and killed many protestors. The two sides signed a power-sharing agreement late in 2019.

Nationwide protests, typically including blockades, gained major publicity in Phoenix, Arizona in 2018 with one goal: get rid of the U.S. Immigration and Customs Enforcement (ICE) agency. The protests were largely the result of calls to end the policy of separating kids from parents in ICE custody.

Protests in Phoenix continued into 2019. While the subject became a hot topic, ICE was not dismantled. Issues surrounding immigrant detention centers and practices continue to be of concern to many.

Vandana Shiva is an agricultural activist from India. In 2014, she led a unique pilgrimage throughout southern Europe. Her goals were simple: educate people about the importance of farming, saving and exchanging seeds, and opposing genetically modified crops.

Shiva and her followers argue that giant seed companies are killing farming, which is bad for all people. While Shiva’s efforts and movement didn’t result in widespread agricultural law and practice changes around the world, she did help create dozens of seed banks to help farmers and farming in India.

In 2016, San Francisco 49ers quarterback Colin Kaepernick took a seat as an act of civil disobedience. In several NFL games, Kaepernick refused to stand during the singing of the national anthem in protest of the wrongful treatment of African Americans and minority groups.

Kaepernick did succeed in bringing awareness to his issue, but it may have cost him his career in professional football.

After a deadly mass shooting at their school in Parkland, Florida in 2018, 40 high school students walked into Florida’s state capitol building uninvited.

Migrant Caravan to the U.S.

A large group of Hondurans began a caravan to the U.S. late in 2018. Families left everything behind, carrying only their children and basic necessities to walk nearly 3,000 miles in hopes of finding a better life. Rather than remain in a country they found to be ridden with poverty and violence, thousands decided to leave.

As the migrant caravan travelled, people from other countries joined. More than 7,000 migrants arrived at the U.S.-Mexico border in November 2018. The group was not welcomed into the U.S. as they hoped. Instead, they were met with hostility and turned away. While migrants continue to journey to the border today, most are sent home.

Social protests can take on many forms and evolve with the times. Certain forms of civil disobedience are legal in specific countries, while other forms are outlawed. In the U.S., for example, a protest with a permit is legal while many other attempts to break laws, even nonviolently, are still illegal.

Some common forms of civil disobedience in the 2000s include:

Civil Disobedience in the 21st Century

Civil disobedience is much more than some fabled method from ancient history. Civil disobedience current events provide hope that there is still room for nonviolent opposition in today’s complex world. Each example of an act of civil disobedience from modern times provides insight on the different ways to effect change and how successful they are.