Have you ever found yourself struggling to figure out the actual words to a song? Have you sometimes sung along to a tune for years before realizing you're using an incorrect phrase? If so, you've experienced mondegreen. This type of linguistic error occurs when someone mishears a phrase and concludes that it says something entirely different from the actual wording. 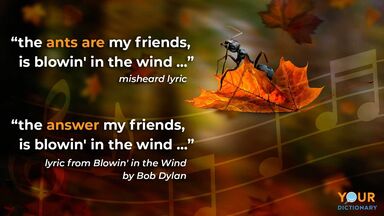 Most mondegreens are inadvertent mishearings then subsequent misspeakings of song lyrics. It typically occurs due to the way certain words are enunciated in the context of a particular melody. There are numerous examples of mondegreens in all genres of music, with songs spanning multiple decades.

The term "mondegreen" is actually an example of the phenomenon described by the word. It doesn't otherwise have meaning. The origin, or etymology, of this term is linked to The Bonny Earl of Murray, which is an old Scottish ballad. This ballad included the phrase "laid him on the green." Upon hearing the poem read aloud, some audience members thought the poet was actually naming a person by the name of Lady Mondegreen. Thus, the name for this type of misinterpretation came into being.

Mondegreens aren't the only types of linguistic mistakes that occur as a result of misperception of what someone is saying or other forms of miscommunication. If you're interested in this topic, explore these eggcorn examples. If that's not enough, seek out some spoonerism examples. It's fun to explore the various ways language can be misused in an entertaining manner.