Myth Story Examples From Around the World

A myth is a traditional story without an author that is usually intended to: 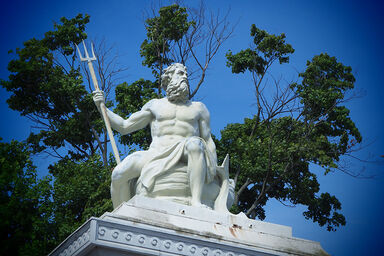 The Master of Waters Poseidon

In ancient times, something like a clap of thunder must've caused quite a fright. They didn't understand the inner workings of meteorology. Imagine the panic a hurricane or earthquake would've incited.

In order to understand these phenomena and, perhaps, bring comfort to people, myths were created as explanations for the many mysteries of life. Even our ancestors contemplated the creation of earth, natural disasters, flaws in humanity, death, and love.

The word myth is derived from the Greek word mythos, which means "story." Myths usually came about during a time when science, philosophy, and technology were not very precise.

Myths exist in every culture and country. Most cultures have their own creation myth. The majority of myths, regardless of their premise, tend to involve the exploits of gods or heroes who possess god-like qualities.

You'll find that many myths are set in a timeless place and involve a plethora of symbols that have multiple meanings. This is what makes myths such an interesting study: decoding their symbols.

Ra was the sun god, often regarded as the most important of all Egyptian gods. Ra emerged from the chaos at the beginning of time and created the world. As well as being a god, Ra also ruled as Pharoah. Many Egyptian rulers claimed they were descended from Ra, to give credence to their seat on the throne.

According to the myth, Ra eventually began to grow weary of his duties. This made his people question whether he should be their ruler. When Ra learned this, he sent his daughter, the ‘Eye of Ra,’ to kill those who doubted him. She went on a rampage and Ra took pity on the humans. He tricked her into getting so drunk she couldn’t continue killing. After this, Ra left the earth for the sky.

This myth can be interpreted as a reflection on the flaws of humanity.

Poseidon was the god of the sea, son of Kronos and Rhea. He became ruler of the sea when the universe was divided after the fall of the Titans. Poseidon was bad-tempered and when he became angry, he would cause earthquakes. He managed to upset even Hades, the ruler of the underworld. Poseidon was most often depicted with his trident, and sometimes riding a horse (he is sometimes claimed to be the creator of horses).

Natural disasters still leave us flummoxed, even today. So, how could earthquakes be explained in ancient times? An angry god who shook the earth is one way.

A bean sídhe was a fairy spirit, that would wail whenever a family member was about to die. (In English, we refer to them as banshees.) The bean sidhe didn’t cause death but announced the death or warned loved ones that death was near, so they could prepare. Some believed she escorted their loved ones safely to the afterlife.

Death - like creation - is one of those inexplicable facets of life. Many cultures employed myths in order to wrap their minds around how and why these things occurred.

Izanagi resolved to have his wife returned to him and sought her out in the underworld. Izanami could not return because she'd eaten 'the dark food,’ but said she would beg the gods to let her go. After waiting a long time Izanagi lit a torch to go find her and when he saw her rotting body he fled and sealed the door to the underworld. Izanami then vowed to kill 1,000 people each day and Izanagi promised to create 1,500 to replace them.

This myth would once have been used to explain how everything came into being and the cycle of life and death.

Huracán was the god of the wind and storm, and could command the natural elements of the earth. He played a large role in the three attempts to create humankind, destroying the second generation that displeased the gods and creating the third and final version of the human race out of corn. The word 'hurricane' is derived from the god Huracán.

Like earthquakes, hurricanes are often unpredictable. Eons before the advent of meteorology, gods like Poseidon and Huracán were created to help people understand these phenomena.

Marduk was possibly the most important god in Mesopotamian mythology. Marduk led the new gods in battle against the old gods. Marduk and his army defeated the old gods and he became the supreme god. After this, Marduk created the sky and earth, as well as the first human beings. Marduk decreed that humans would do the work gods had no time for and in return the gods would care for them.

Even today, we debate the origins of the earth. This myth is another example of a culture's attempt to explain how we all came to be and our purpose in life.

Thor is the hot-tempered god of thunder in Norse mythology, the son of the chief god, Odin, and goddess of the earth, Fjorgyn. As a strong and courageous warrior, Thor was the protector of both gods and humans. Lightning bolts flew from his hammer Mjöllnir as he slew enemies, but it could also be used to heal and revive. Thor was so revered that when the Anglo-Saxons adopted the Roman calendar, they named the fifth day of the week 'Thursday', after him.

Thunder and lightning can be powerful and frightening. So, believing it was Thor defending his people probably soothed some terrified souls.

This is one we all know, illustrating the magnitude of mythology. Cupid was the god of love and desire. He was the son of Venus and usually depicted as a winged child carrying a bow and arrows. His arrows could either draw people together or pull them apart.

This myth tries to explain why one person can be so intensely drawn to another and even why relationships don’t always work out the way you hoped. It also shows that myths didn’t only cover natural events but day-to-day life too.

The Cailleach is the winter goddess who created the mountains and hills that speckle the Scottish Highlands. Some myths say she created them as her stepping stones. Others say she accidentally created them when she dropped rocks out of her apron. Her staff froze the ground but she kept the seeds safe for spring.

Her story encompasses the power and beauty of nature and the changing of the seasons. Of course, now we have the benefits of science. But, back then, it might've been helpful to attribute such glory to the hands of a god.

Here we are, in the 21st century, and many of us still enjoy mythological tales. Courses are taught at universities. Tomes have been written on the subject. Even blockbuster movies relive the adventures found within mythological tales. Isn't it fun, just for a moment, to imagine a god of thunder who fearlessly protects his people from fates worse than death with a magical hammer?

Today, we don't need a storm god to explain wind and rain. However, you can see why myths were once created. Ancient people wanted to wrap their minds around mystifying acts of nature they couldn't otherwise comprehend. Perhaps the human condition hasn't changed much because they, too, couldn't make much sense of love. Maybe it's time for Cupid to step up his game.

If you want to delve deeper into these tall tales YourDictionary also has articles with more examples of Greek myths and Egyptian myths.