Naturalism in Literature: Characteristics and Examples 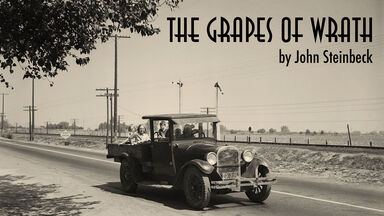 What Does Naturalism Mean in Literature?

Have you ever cracked open Mary Shelley’s Frankenstein? If not, you’ve heard the story of Victor Frankenstein and his monster. The vivid imagery and flowery wording of that book make it part of romanticism. However, some writers thought romantic books were just too flowery so another movement called realism came into play. Much like its name, realism is all about portraying real life.

A great example of naturalism is John Steinbeck’s The Grapes of Wrath. In the beginning, the Joad family are instinctive animals just trying to survive against the powerful forces of society and nature. However, as the novel progresses, they learn to adapt to their surroundings and circumstances.

Now that you know a bit about naturalism, get a better feel of this style of writing through more examples.

Naturalism literature is found all around us. Not only does it portray the harsh elements working to squash humans, but it shows animalistic tendencies. Explore these excerpts of naturalism at play.

A Rose for Emily By William Faulkner

What was left of him, rotted beneath what was left of the nightshirt, had become inextricable from the bed in which he lay; and upon him and upon the pillow beside him lay that even coating of the patient and biding dust. Then we noticed that in the second pillow was the indentation of a head. One of us lifted something from it, and leaning forward, that faint and invisible dust dry and acrid in the nostrils, we saw a long strand of iron-gray hair.

In the short story “A Rose for Emily”, it’s easy to see the natural forces at play. Both society and heredity have cast Emily out. While society causes Emily to be in isolation, her mental illness has her killing and keeping her lover’s body with her until her death.

The Red Badge of Courage by Stephen Crane

Following this came a red rage. He developed the acute exasperation of a pestered animal, a well-meaning cow worried by dogs. He had a mad feeling against his rifle, which could only be used against one life at a time. He wished to rush forward and strangle with his fingers. He craved a power that would enable him to make a world-sweeping gesture and brush all back. His impotency appeared to him, and made his rage into that of a driven beast.

In science, humans are nothing more than animals. The animalistic tendencies of humans are clear in The Red Badge of Courage. Given the right influences, like the battlefield, you feel the transformation from man to beast.

To Build a Fire by Jack London

He plunged in among the big spruce trees. The trail was faint. A foot of snow had fallen since the last sled had passed over, and he was glad he was without a sled, travelling light. In fact, he carried nothing but the lunch wrapped in the handkerchief. He was surprised, however, at the cold.

In London’s “To Build a Fire”, nature and the elements clearly win out against lowly humans. When it comes to the forces around us, one simple mistake can lead to death as it does in the story. That is why only the strong survive.

Since naturalism is a subgenre of realism, it’s easy to get the two confused. However, the two have a few distinct differences.

However, it should be noted that a few authors were considered both naturalists and realists such as John Steinbeck and William Faulkner. It’s all about the way you look at it.

The Nature of Naturalism

Naturalism was an offshoot of realism. It depicts realistic views of the world to the extreme by looking at how humans are powerless animals driven by the natural forces pushing on them. Now that you have naturalism under your belt, allow realism and magic to mix in magical realism examples.