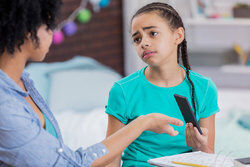 Girl handing over her phone
Advertisement

The use of punishment is one way to deter or eliminate undesired behavior. In the case of negative punishment, it is where you take away something positive to decrease an undesirable or bad behavior. Basically, to punish bad behavior, something you like is taken away. This could be your car, job, toy or even your freedom.

When thinking of negative punishment, you might think of B.F. Skinner and his experiments with animals on operant conditioning. However, negative punishment examples in real life happen all the time in work, school, home and even the grocery store.

When it comes to the real world, negative punishments are found everywhere. It’s one way that employers, parents, teachers and even the government try to make sure that people don’t break the rules. Dive into some fun and unique negative punishment examples in real life.

A teenager has a curfew of 10 p.m. She misses her curfew by 10 minutes. Her parents take away the Bluetooth speaker in her room for three days.

Answering the Phone in School

A teen answers his phone in the classroom, interrupting the teacher. The teacher takes away his phone for the rest of the day.

Here, the teacher is hoping that by taking away the phone (positive item) as punishment, the teenager will not answer his phone in class again. This is because they do not want the repeat punishment of losing their phone.

At a customer service center, a worker isn’t answering enough phone calls. The boss calls the worker into his office and demotes his pay for his bad performance.

A drunk driver is pulled over by the police. After several sobriety tests, the police officers arrest the man and impound his car for breaking the law against drinking and driving.

To curb the undesirable behavior of fighting, the mother is taking away the video game. By taking it away, the sisters might think next time about sharing rather than fighting over it.

A toddler is having a tantrum at a supermarket. The mother of the toddler takes away his blanket (that he loves) until he stops his tantrum.

The removal of the blanket is the negative punishment for the tantrum. If this is done each time, the toddler will learn that tantrums mean his blanket gets taken away. This might lead to fewer tantrums in the future.

A worker is caught stealing supplies from her workplace. The workplace has a zero tolerance for employee stealing. After being caught, she is fired from her job.

The employer is taking away the job (a desirable thing) for being caught stealing (behavior that needs modification). This is an example of negative punishment, because the worker will no longer have money to live and must find a new job. This will also encourage the worker not to steal in the future.

Refusing To Do Chores

A brother and sister are not doing their chores when they come home from school. Fed up, a mother resets the Wi-Fi password so the children can no longer access the Internet.

The mother is attempting to punish the children for not doing their chores by taking away their online privileges. In the future, the children know that if they don’t do their chores, they will lose access to the Internet.

A high school senior swears in school and is sent home with a note. His parents take away his car keys for one week and make him ride the bus to school.

Removal of the food is something that the dog doesn’t want. Therefore, the dog will stop growling when someone approaches his food bowl because he wants to keep his food.

Negative punishment can be very effective in reducing bad or unwanted behaviors. This is because it makes a person (or animal) start to associate the loss of something positive (like their car or video game) with the negative behavior (swearing or missing curfew).

When it comes to behavior modification, punishment is a very effective tool to help your child, student, worker or even pet to learn to behave themselves. Now that you’ve explored negative punishments, you might want to delve into the complicated world of positive reinforcement and negative reinforcement, too. And remember it’s all about behavior!