Nobody likes a "Negative Nancy." But, in grammar, negative sentences aren't necessarily a bad thing. Negative sentence examples include statements of things that are false. They don't have to be accurate or true; they're simply statements from a speaker or writer that are believed to be untrue. 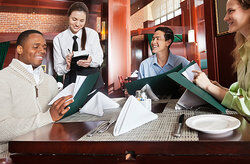 For example, "She does not speak Spanish." These statements stand in stark contrast to positive sentence examples. There, the speaker might say something like, "She speaks French very well." Let's take a closer look at negative statement constructs.

What Is a Negative Sentence?

Negative sentences can also make use of the words "do" or "will" (including "do," "did," and "does") before "not." In any of these constructs, it's possible to substitute "does not" with the contraction "doesn't." Other examples include didn't, isn't, wasn't, weren't, and won't. If you're writing a formal document or an academic essay, it's best not to use contractions. However, for informal writing, including blogging and social media posts, contractions are perfectly acceptable.

Positive and negative sentences in English grammar are complete opposites. But, making the change from negative to positive is quite easy. Why would you want to do this? Your sentences will benefit from improved clarity with positive statements.

Why say something "is not purple" when we can be more specific and say it is blue? Positive sentences require fewer words, fewer verb conjugations, and draw a direct line to the point you're trying to make. Let's change all the negative sentences above to positive sentences and see how they clear things up.

Of course, we can't rid ourselves of negative sentences completely. And we wouldn't want to either. Sometimes it's necessary to say, "This isn't a beetle but I don't know what kind of bug it is." There's no way around saying what "isn't" from time to time. However, in the instances where you can positively say what is rather than what isn't, you're setting yourself up for some nice, clean prose.