Thomas Jefferson had an impressive political career. He is considered to have been the primary author of the Declaration of Independence (1776). He also authored the Virginia Statute for Religious Freedom (1777), served as the third president of the United States (1801-1809) and founded the University of Virginia (1819). He has a special place in history as a political philosopher and one of the most influential founders of the United States. His legacy lives on in his accomplishments and words, including many interesting Thomas Jefferson quotes. 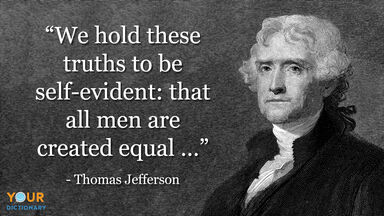 Quotes on the Thomas Jefferson Memorial

The Thomas Jefferson Memorial in Washington, D.C. has a number of its namesake's quotes inscribed on it. The memorial includes a quote taken directly from the Declaration of Independence, as well as other influential words uttered by Jefferson. Excerpts from a few of the full quotes on the Jefferson Memorial are listed below.

Quotes From Jefferson's Letters and Writings

Thomas Jefferson wrote prolifically throughout his life. The Library of Congress (LOC) has amassed a collection of letters, papers and other documents penned by Jefferson through his life, from his early days in public service until after his days in the White House.

Quotes From Political Speeches and Documents

As a political leader and elected official, Thomas Jefferson gave many notable speeches throughout his career and was involved in crafting numerous official documents. Some of his most noteworthy quotes are linked to these types of writings and presentations.

Jefferson was passionate about books, so much so that in a June 10, 1815 letter to John Adams, he wrote "I cannot live without books." He wrote one book (Notes on the State of Virginia, 1832), but stocked three libraries with books written by others. It seems fitting that some of his most impactful quotes are immortalized between the covers of books about his life and contributions.

Now that you are familiar with a selection of Thomas Jefferson quotes, take the time to learn more about his fascinating life. Review the biography of Thomas Jefferson to discover some basic facts about his background and accomplishments. Then, you might enjoy some political quotes from other famous leaders.