Noun Examples by Type: How Do They Work?

A noun is a part of speech that names a person, place, thing, idea, action, or quality. But choosing the correct noun can sometimes be trickier than it seems. Take a look at several noun examples to learn more about writing and communicating clearly. 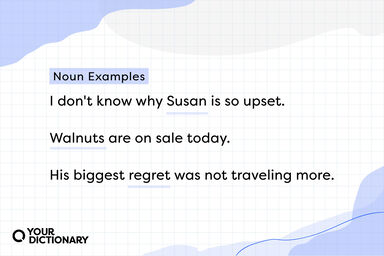 Nouns Used in a Sentence

When you’re referring to a person’s name, you use a proper noun, such as Katie, Mrs. Miller or Dr. Edwards. However, general words for people, such as child, father or mechanic, are common nouns.

Examples of nouns that refer to people include:

Nouns can also refer to places, whether they are specific places (proper nouns such as Portland or Lowell’s Repair Shop) or general locations (common nouns such as the airport or the school). For example:

If it’s not a person or a place, it’s probably a thing. Specific nouns that are considered things can be proper (such as the Dead Sea Scrolls or the United Nations), while nonspecific things are generally common (a stapler or a puppy). For example:

What do you call a noun that you can’t see or touch? It’s an idea, such as nouns like happiness, poverty, education, and gratitude, and is almost always a common noun. For example:

Other Types of Nouns

Beyond people, places, things and ideas, you can categorize nouns grammatically. These types of nouns include:

The chart below includes the various types of proper and common nouns, as well as definitions and examples of each type of noun:

If you are looking for more information on different parts of speech, check out: