An oasis is a place in a desert that has water supplied by a spring or other underground water source. The word oasis can also be used in a metaphorical way to describe a refuge or relief from something difficult or unpleasant. Discover a selection of oasis examples throughout the world, including many oasis names and locations. 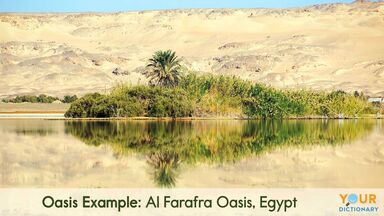 What Is an Oasis in the Desert?

An oasis is often described as a place of comfort amidst difficulties. In a dry, arid region like a desert biome, it is an area that is fertile in a way that seems unlikely or impossible. This geographic term refers to a patch of green growing plants and/or water in an otherwise harsh and parched climate. An oasis in the desert may seem to appear out of nowhere, but that's not really the case. Instead, it is made fertile by an underground source of water that allows vegetation to grow, or even thrive.

There are many examples of desert oases throughout the world. Various plants from dry regions grow in these areas.

The list of places where you can find an oasis in the desert continues.

Discover the names of even more physical oasis examples, along with where they are located.

The word oasis isn't always used to describe an oasis in the desert. It can be used to refer to a place of refuge that provides a respite from the stressors of daily life or other taxing experiences.

Get to Know Geography

There are many different oases, some are physical and others are metaphorical. Now that you've seen examples of both types of oasis, has this awakened an interest in geography? After all, physical oasis examples illustrate how fascinating and unexpected geographic locations might be. If you're interested in discovering what else is out there in the world, explore some of the different types of landforms that exist.