Before you can get into the different examples of an oligarchy, it’s important to look at what an oligarchy is. By definition, an oligarchy is a form of government where the power is in the hands of a small number of elite people. This could be the wealthy, a military group or even a family. Explore some different ancient and modern oligarchy examples. 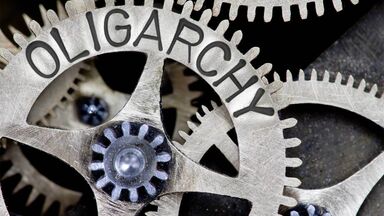 Oligarchies are where a small minority rules a government and typically exercises power in corrupt ways. Throughout the history of humans, there have been several small groups that have ruled individual nations. Explore several historical oligarchies.

From 800 B.C. to 650 B.C., Greek city-states like Athens and Sparta were ruled by groups of rich men that shared power like a king. These oligarchs used their power to enhance the lives of the rich but ignored the common people's needs.

The Polish-Lithuanian Commonwealth only lasted until 1795. But during its history, this country was ruled by the Szlachta, a wealthy ruling class representing about 10% of the population. It was only the Szlachta that had rights.

Between 1948 and 1994, South Africa was controlled by the National Party made up of white individuals. White individuals had an oligarchic power over the country and were the only ones allowed to vote. This was also known as Apartheid.

Under the same note as Apartheid, Liberia had an oligarchy of Americo-Liberians that ruled over several tribes. The elite ran the country for several years.

If you thought oligarchies were a thing of the past, you’d be sadly mistaken. There are several examples of modern oligarchies all around the world.

Russia can be considered both a historical and modern example of an oligarchy. The wealthy and elite in Russia are the ones to run the government. Many of these oligarchs achieved their wealth after the fall of the Soviet Union, also considered an oligarchy.

Much like Russia, Iran is run by an elite group of wealthy people within the country. The “thousand families” of the Pahlavi dynasty was replaced by the newly rich after the revolution in the late 1900s. Many of these oligarchs are criticized for flaunting their wealth.

Turkey doesn’t have a conventional oligarchy but is considered by many to be an oligarchy given the amount of power the Koc and Sabanci family have in the government. These two wealthy families wield a lot of economic power through their multiple corporations and close ties to the Justice and Development (AKP) party. However, as of 2018, the country was working to change this.

Ukraine attempted to overthrow its oligarchy nation in the early 2000s; however, the revised government is still composed of old oligarchs. These wealthy elites, like Igor Kolomoisky, have a powerful hold over the government due to their hold on the wealth and fuel.

Due to the small circle of elites running politics, business and military, Zimbabwe is classified as more of an oligarchy than a democracy. In Zimbabwe, the oligarchs are part of the Zimbabwe African National Union-Patriotic Front (ZANU-PF). This group uses their wealth and connections to elect specific political figures and change government policy.

While not all economists agree, a recent Princeton and Northwestern University study showed that the United States was also an oligarchy. This was due to the wealthy elite having more rule over the country than general citizens. It was pointed out that policy changes with support from the economic elite typically pass through the government.

The difference between an oligarchy and a democracy is who holds the power. In an oligarchy, a small elite group holds the majority of the power. However, in contrast, the people are said to hold the government's power in a democracy. Some oligarchies can look like democracies, but if you follow the ruling class, it’s typically an elite group of wealthy individuals that use their money and connections to run the government behind the scenes.

Oligarchies can be found throughout history but still exist today. In fact, some current political systems are now considered oligarchies like the United States. Now that you have a solid understanding of oligarchy examples, learn more about democratic country examples.