Oligopoly is an economic term used to describe a specific type of competitive environment. The word "oligopoly" comes from the Greek oligos, meaning "little or small" and polein, meaning "to sell." When oligos is used in the plural, it means "few." The word oligopoly is used to refer to a market sector in which there are only a few competitors. 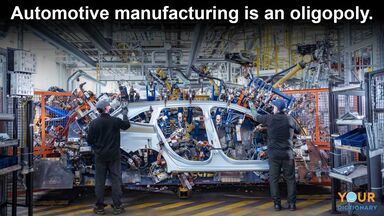 Oligopoly Meaning: What is an Oligopoly?

An oligopoly is a middle ground between a monopoly and open competition. An oligopoly occurs when a small group of businesses, at least two, control the market for a certain product or service. This gives these businesses a huge influence over price and other aspects of the market. While other businesses could seek to enter an oligopoly, it is difficult to compete as a startup in an industry dominated by only a few market leaders.

Since it is the middle ground, oligopoly examples are abundant in the economy.

Businesses that are part of an oligopoly share some common characteristics:

Open competition is defined by a free market in which there are, or can be, many competitors. The industry is not dominated or controlled by just a few large organizations. With an oligopoly, there are only a few competitors. While other businesses could enter an oligopoly, it is more likely that investors would seek to enter a niche with open competition rather than trying to break into a market that is already controlled by a few major players.

Now that you are familiar with what an oligopoly is, focus on learning more about economics. Start by discovering some basic economic terms and concepts. From there, you may want to explore some business word abbreviations.