Providing an all-knowing voice, an omniscient narrator guides the reader through the story in a unique way. Seeing examples of this type of narration can help you better understand the kinds of omniscient narrators and the purpose of using this storytelling technique in writing. 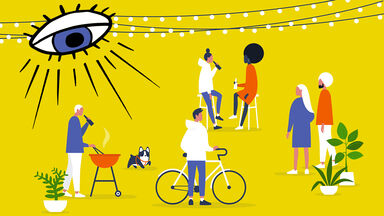 What Is an Omniscient Narrator?

An omniscient narrator is a narrator who knows what is happening at all points of the story at all times. This narrator knows the thoughts and feelings of all the characters in the story.

How Do You Know if a Narrator Is Omniscient?

If you’re wondering whether a narrator is omniscient, ask yourself these three questions:

Why Writers Use an Omniscient Narrator

There are several reasons a writer may choose to tell a story with an omniscient narrator. This type of narration style allows the writer to share all information with the reader, as opposed to more limited perspectives like third person limited and first person. It also gives the reader an objective viewpoint, rather than the subjective view of one narrative perspective or a potentially unreliable narrator.

Little Women by Louisa May Alcott

In Louisa May Alcott’s famous novel, Little Women, the main character is Jo March. However, the narrator doesn’t stay solely with Jo. The reader is privy to Jo’s thoughts and feelings, but the reader also hears about the thoughts and feelings of other major characters. In this excerpt, the reader gets the perspective of Amy and even Aunt March through third person omniscient narration:

While these things were happening at home, Amy was having hard times at Aunt March's. She felt her exile deeply, and for the first time in her life, realized how much she was beloved and petted at home. Aunt March never petted any one; she did not approve of it, but she meant to be kind, for the well–behaved little girl pleased her very much, and Aunt March had a soft place in her old heart for her nephew's children, though she didn't think it proper to confess it.

War and Peace by Leo Tolstoy

With its many characters and intricate relationships, Leo Tolstoy’s War and Peace is another excellent example of a third person omniscient narrator. In this excerpt, Tolstoy describes two characters and the contrast between them:

Prince Vassily always spoke languidly, like an actor repeating his part in an old play. Anna Pavlovna Scherer, in spite of her forty years, was on the contrary brimming over with excitement and impulsiveness. To be enthusiastic had become her pose in society, and at times even when she had, indeed, no inclination to be so, she was enthusiastic so as not to disappoint the expectations of those who knew her. The affected smile which played continually about Anna Pavlovna’s face, out of keeping as it was with her faded looks, expressed a spoilt child’s continual consciousness of a charming failing of which she had neither the wish nor the power to correct herself, which, indeed, she saw no need to correct.

The Scarlet Letter by Nathaniel Hawthorne

In The Scarlet Letter, Nathaniel Hawthorne makes use of third person omniscient narration to describe not just the feelings and thoughts of his main characters, but of the general public as well. This is important for a novel in which public opinion plays such a major role:

The young woman was tall, with a figure of perfect elegance, on a large scale. She had dark and abundant hair, so glossy that it threw off the sunshine with a gleam, and a face which, besides being beautiful from regularity of feature and richness of complexion, had the impressiveness belonging to a marked brow and deep black eyes. She was lady-like, too, after the manner of the feminine gentility of those days; characterized by a certain state and dignity, rather than by the delicate, evanescent, and indescribable grace, which is now recognized as its indication. And never had Hester Prynne appeared more lady-like, in the antique interpretation of the term, than as she issued from the prison. Those who had before known her, and had expected to behold her dimmed and obscured by a disastrous cloud, were astonished, and even startled, to perceive how her beauty shone out, and made a halo of the misfortune and ignominy in which she was enveloped. It may be true, that, to a sensitive observer, there was something exquisitely painful in it. Her attire, which, indeed, she had wrought for the occasion, in prison, and had modelled much after her own fancy, seemed to express the attitude of her spirit, the desperate recklessness of her mood, by its wild and picturesque peculiarity. But the point which drew all eyes, and, as it were, transfigured the wearer,--so that both men and women, who had been familiarly acquainted with Hester Prynne, were now impressed as if they beheld her for the first time,--was that SCARLET LETTER, so fantastically embroidered and illuminated upon her bosom. It had the effect of a spell, taking her out of the ordinary relations with humanity, and inclosing her in a sphere by herself.

In Pride and Prejudice, Jane Austen stays mainly with the perspective of the main character, Elizabeth Bennet, in her third person point of view. However, the narrator is truly an omniscient one, as she shifts subtly to Mr. Darcy’s perspective from time to time.

Mr. Darcy, who was leaning against the mantle-piece with his eyes fixed on her face, seemed to catch her words with no less resentment than surprise. His complexion became pale with anger, and the disturbance of his mind was visible in every feature. He was struggling for the appearance of composure, and would not open his lips, till he believed himself to have attained it. The pause was to Elizabeth's feelings dreadful.

Pillars of the Earth by Ken Follett

Ken Follett uses shifting third person omniscient narration in a more defined way in Pillars of the Earth. With each section, he changes his main character, offering a third person perspective on that main character’s thoughts and feelings. The narrator knows all and understands the various perspectives, sharing them with the reader in sections.

Alfred was fourteen years old, and tall like Tom. Tom was a head higher than most men, and Alfred was only a couple of inches less, and still growing. They looked alike too: both had light-brown hair and greenish eyes with brown flecks. People said they were a handsome pair. The main difference between them was that Tom had a curly brown beard, whereas Alfred had only a fine blond fluff. The hair on Alfred’s head had been that color once, Tom remembered fondly. Now that Alfred was becoming a man, Tom wished he would take a more intelligent interest in his work, for he had a lot to learn if he was to be a mason like his father; but so far Alfred remained bored and baffled by the principles of building.

A Series of Unfortunate Events by Lemony Snicket

In the first book in this series, The Bad Beginning, the reader immediately senses the unique narration style of this book when the narrator says, “I’m sorry to tell you this.”

If you are interested in stories with happy endings, you would be better off reading some other book. In this book, not only is there no happy ending, there is no happy beginning and very few happy things in the middle. This is because not very many happy things happened in the lives of the three Baudelaire youngsters. Violet, Klaus, and Sunny Baudelaire were intelligent children, and they were charming, and resourceful, and had pleasant facial features, but they were extremely unlucky, and most everything that happened to them was rife with misfortune, misery, and despair. I’m sorry to tell you this, but that is how the story goes.

The Narrator Has a Significant Impact

There are many ways to tell a story, and the narration style a writer chooses has a significant impact on how the reader perceives the events being described. Take some time to learn about different types of narration so you can be familiar with them when you see them, whether you’re reading a book with an omniscient narrator or another style.