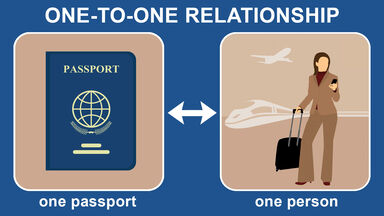 example of a one-to-one-relationship
Advertisement

For example, one student has one teacher. But that teacher probably has a whole classroom of students, making that relationship one-to-many instead of one-to-one. It would be more accurate to say that each student has one backpack, and that each backpack belongs to one student.

Some examples that are not one-to-one relationships (and are therefore one-to-many relationships) are kitchen appliances. You may only be able to bake a cake in an oven, for example, but the oven can be used for many different foods. Purchasing an appliance that only has one purpose wouldn’t be the most versatile use of your money!

A popular place to hear the phrase “one-to-one” is in the classroom. Many school districts want their students to each have an electronic device, such as a tablet or laptop. This describes a “1:1 classroom.”

Other examples of one-to-one relationships in education are:

Some of these examples can become one-to-many examples when you think of multiple classes. For example, one student may occupy one desk in their first period class, but in the second period, another student will sit there. Each student has one desk, but over the course of the day, the desk will have many students. However, the one-to-one relationship between students and desks stays consistent per period.

Businesses know the value of one-to-one relationships. Exclusive agreements and connections often help businesses set themselves apart from their competition. Employees in a company are also individuals with specialized skills as well.

Here are some examples of true one-to-one relationships in business:

Other Examples of One-to-One Relationships

Relational databases have three types of relationships between data entries: one-to-one, one-to-many, and many-to-many. A straightforward relational database links one item to another, and the second item to the first item.

Companies use one-to-one marketing to directly target potential customers and users. They collect information about customers based on previous interactions and tailor advertisements specifically for them. Think about the last time you ordered something online, and then clicked to another browser just to see an ad for the very same item! That’s one-to-one marketing.

We Rely on Each Other

In any context, one-to-one relationships keep us connected to each other. This interdependence is the basis for life all over the world. Learn more about the connections between animals and their habitats with these examples of symbiotic relationships.