A palindrome is a word, phrase, number, or sequence of words that reads the same backward as forward. Punctuation and spaces between the words or lettering are allowed. The palindrome examples below will provide some interesting insight into this wordplay. For instance, do you know just how far back palindromes date? 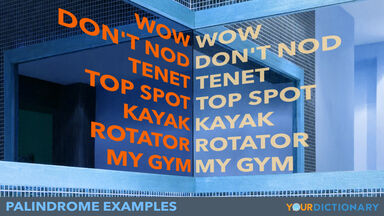 The longest single-word palindrome in the English language, according to the Oxford English Dictionary, is the onomatopoeic word tattarrattat, coined in Ulysses by James Joyce (1922). It refers to a knock on the door. Other fun palindrome words include:

The longest palindrome in use today is said to be the 19-letter Finnish word saippuakivikauppias, which means soapstone vendor.

Palindromes aren't limited to one-word terms. There are a few multi-word phrases that actually spell the same thing forward and backward.

Believe it or not, there are even some complete sentences (and even a few questions!) that are palindromes. Most, but not all, examples of sentence palindromes are quite brief.

There are several different types of palindromes. They all have one thing in common: they all read the same whether you read them from left to right or right to left. Discover how they differ.

Palindrome examples also exist in phrases or sentences where punctuation, capitals and spacing are ignored. Examples include:

Palindromes exist in names too. For example, a past Prime Minister of Cambodia was named Lon Nol. The name of the band Abba is also a palindrome.

Word palindromes are an interesting variation of standard palindromes. They use whole words rather than letters, for example, "First ladies rule the State and state the rule: ladies first." Here, instead of each character matching, the entire sentence can be read backward and forward, one word at a time. The individual letters don't match, but the whole words do.

Terms that can be used to create a magic word square are another type of this phenomenon. This type of palindrome word is able to reproduce itself. If a word is formed from the first letters of each word, and then from the second, the third and so on, the term can then be arranged into a word square. A word square can be read in four different ways: horizontally or vertically from either top left to bottom right or bottom right to top left.

Palindromes aren't just a word game. They are also found in numbers and are studied in recreational mathematics. In fact, a palindromic prime is a prime number that reads the same from left to right and right to left, such as 191 and 313.

Palindromes are even seen in molecular biology. Many molecular lengths between four and eight nucleotides are palindromic. They correspond to nitrogenous sequences that read the same forward as they do backward.

Palindromes are seen in dates. They occur when a particular date can be written in a numeric form such that it reads the same frontward and backward. One example is the numeric form of December 11, 2021 (12/11/21).

Palindromes also occur in acoustics when a recorded phrase sounds the same as it does live when the recording is played backward. Palindromes can be found in musical compositions, including The Owl and the Pussy Cat by Igor Stravinsky.

History of the Palindrome

The word palindrome is derived from the Greek words palin, which means "back" or "again" and dromos, which means "direction." The actual Greek phrase alluded to the backward movement of the crab.

This first known palindrome was in Latin; it read sator arepo tenet opera rotas. This phase means either:

It's not exactly a grammatically correct sentence, but it's still pretty fun.

Palindromes were also found in ancient Greek and in ancient Sanskrit. So, it seems that people have been having quite a lot of fun with these unique words for a long time. Palindromes date back to about A.D. 70 when they were first found as graffito (graffiti) buried in ash at the ancient city of Herculaneum.

The purpose of using palindromes in your writing, whether it's words, whole sentences or numbers, is to exercise your brain, working within tight parameters to create something interesting and entertaining. Consider them a type of brain teaser. Go ahead and have fun with palindrome words! For more oddities of the English language, check out emordnilap examples. These are words that spell out different words when read forward and backward.