A paraprosdokian is a sentence or statement with an unexpected ending. It means “against expectations” in Greek, and typically puts the first part of the sentence in a new and humorous context. Keep reading for examples of well-known paraprosdokians from comedy, literature, and music. 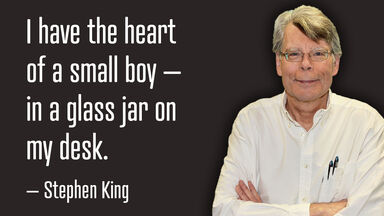 Using these figures of speech in a joke, piece of writing, or a song can expertly twist your meaning. They keep an audience engaged and aware of a comedian’s ability with wordplay. When you start reading examples of paraprosdokians, you’ll find that they make up the punchline of some hilarious and sophisticated one-liners!

Henny Youngman’s famous joke “Take my wife – please!” is perhaps the most well-known example of a paraprosdokian in comedy. You expect that he’s using his wife as an example for a joke, but then indicates he wants you to literally take her away by adding the punchline “please!”

Check out these additional comedic paraprosdokian examples, and notice how they often use puns:

Paraprosdokians From Movies and Television Shows

Sitcoms and movies often use paraprosdokians as one-liners for their characters. Shows like Arrested Development and Seinfeld use so many one-liners that they’re regularly quoted long after coming off the air! Check out these funny paraprosdokians from movies and television:

Writers love using wordplay to keep their readers guessing. Clever writers sprinkle paraprosdokians into their descriptions, narration, and dialogue to establish a humorous tone. Here are some examples of paraprosdokians from authors:

Popular politicians are known for their wit and clever sayings. No matter which political party you vote for, you’ll enjoy these hilarious paraprosdokians from history:

Having Fun With Wordplay

Paraprosdokians are a great way to layer humor into your writing. But they’re not the only way to use wordplay! Check out these examples of funny puns (or punny funs!) for more literary giggles.