Parataxis: Definition, Examples, and Why Writers Use It

Words have weight! If you’ve ever been bullied you know this is true. However, depending on how you structure them, the weight of words or phrases can be more exaggerated. Parataxis is a literary device used to add equal weight and flow to phrases. See how this works through parataxis examples. Learn how parataxis is different from asyndeton and hypotaxis. 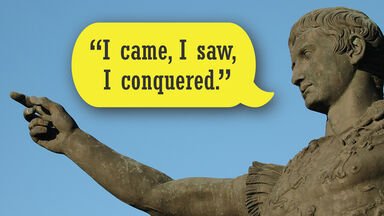 Sometimes you don’t need a conjunction. Or at least, if you have the literary device of a parataxis you don’t. In simple terms, a parataxis definition is when independent phrases are placed side-by-side without conjunctions. Think of the famous Julius Caesar line, “I came, I saw, I conquered.” In a nutshell that is parataxis.

Writers like to use parataxis in their writing because it works to give the words or phrases equal weight in the passage. However, while most parataxis phrases will omit the conjunctions completely, ‘and’ and ‘but’ are considered acceptable. For example, you can see ‘and’ used in this parataxis in A Farewell to Arms by Ernest Hemingway.

In the bed of the river there were pebbles and boulders, dry and white in the sun, and the water was clear and swiftly moving and blue in the channels.

Even though the ‘and’ is added here, the phrases still each hold equal weight in the sentence. And, as you read, these phrases stand out to you and provide a nice stream of consciousness feel to the writing.

With a clear definition of parataxis under your belt, see some examples in action. A few writers love to use this concise style.

Twenty-two years old, weak, hot, frightened, not daring to acknowledge the fact that he didn’t know who or what he was … with no past, no language, no tribe, no source, no address book, no comb, no pencil, no clock, no pocket handkerchief, no rug, no bed, no can opener, no faded postcard, no soap, no key, no tobacco pouch, no soiled underwear and nothing nothing nothing to do … he was sure of one thing only: the unchecked monstrosity of his hands…

Toni Morrison really packs a punch into this section. Through the concise writing style, you see the bleakness of the man. The concise flow of the words and ideas creates a poetic feel within the passage.

Farewell, My Lovely by Raymond Chandler

Raymond Chandler brings the stark contrast between the needs and reality of this character in Farewell, My Lovely. By giving each phrase equal weight, the needs pile up on one side far outweighing what the man actually has available.

Writer Colum McCann not only makes use of parataxis but also does away with complete sentences. The short, choppy structure allows you to see the flow of the narrator's words. Additionally, emphasis is added to the phrase ‘let it be’ allowing your mind to see the importance and add the connections.

In "Salut au Monde", the parataxis within the poem creates a piling up effect. The different phrases seem to pile up on each other, adding a unique cadence to the words.

Dickens' use of paratactic writing in A Tale of Two Cities creates effective contrast. The piling up and juxtaposed words add interest to this introduction.

Parataxis and asyndeton are similar. In fact, sometimes the two terms are used interchangeably. However, asyndeton removes clauses completely from a sentence or parts of a sentence. Parataxis, on the other hand, is where phrases are placed one after the other with or without clauses like and or but. Therefore, while the two terms are very similar, they do have some distinctions.

The difference between hypotaxis and parataxis comes down to conjunctions. While parataxis avoids them, hypotaxis adds them to indicate a relationship. For example, she knew everything would be okay because her father walked through the door. The use of ‘because’ conjoins the two phrases showing the relationship.

Parataxis is a unique type of concise writing that removes conjunctions between phrases. It works to give equal weight to phrases and add a nice stream of consciousness feel to the writing. Now that you’ve explored parataxis, you might like to check out polysyndeton.