You can learn a lot about a language by studying examples of parts of speech. In language, the parts of speech are the categories of words based on their function within a sentence. This is true with English, as well as any number of other languages such as French and Spanish. Understanding parts of speech is a helpful way to look at words to help you understand the underlying grammar and logic of any language you study. 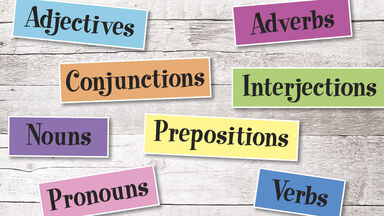 Parts of Speech Examples in English

In English, there are eight different parts of speech. However, some people also classify articles as a part of speech making a total of nine. Examine the nine different word classes through the examples below.

Adjectives modify or describe a noun. These words ascribe an attribute to the noun being modified.

Adverbs modify or describe a verb, adjective, or another adverb or word group. This modification provides information relating to time, place, manner, cause, degree, or circumstance.

Conjunctions are used to connect words, phrases, and clauses. They coordinate the words together so they make sense as a cohesive thought, sentence, or paragraph.

Interjections are words used as exclamations to show feelings. They're usually abrupt, interrupting the speech for emotional effect.

Nouns name a person, place, thing idea, or quality. They can act as the subject or the object of a sentence.

Prepositions are used to indicate relationships, often spatial, between nouns and pronouns. They indicate how one noun, noun phrase, or pronoun relates to another.

Pronouns take the place of nouns to simplify speech and writing. They can otherwise function in the same way as nouns, serving as subjects and objects in sentences.

Understanding the Parts of Speech

The following chart describes each of the parts of speech and gives everyday types of word examples. This should help provide a better understanding of how each part of speech works.

Knowing the different parts of speech and reviewing examples of each can help you improve your grammar. This, in turn, helps you become a more confident speaker and writer. It also ensures you don’t fall into grammar mistakes.