Examples of Odes in Poetry: Types and Famous Poems

An ode is a form of lyric poetry that is written in celebration, dedication, appreciation, or reflection of something. Odes are almost always written about a significant event, or someone or something that the poet admires. The creation of odes is attributed to the poet Pindar, who was one of the nine canonical poets of ancient Greece around the fifth century B.C., along with Sappho and others. 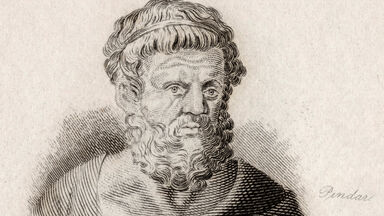 Odes were originally performed to music; the word ode comes from the Greek word oide meaning "to sing or chant." These songs were irregular in length, metrical patterns and rhyme. Odes have evolved since the time of the ancient Greeks, but the basic form and concept have endured, and odes have evolved into three different types:

The Anatomy of an Ode

What sets an ode apart from other forms of poetry is structure. However, the three types of odes all have different structures as well. An irregular ode has no set structure, while Pindaric and Horatian odes have certain standards that must be met. The length of an ode can vary, but they tend to be several stanzas that follow a fixed pattern.

Pindar was often described as the greatest lyrical poet, so it makes sense that the most lyrical style of ode was named after the master himself. Pindaric odes were meant to be performed with dancers and a chorus, celebrating events like the Olympics. Pindar loved to include mythological allusions in his writing to celebrate the gods.

Aside from Pindar, his contemporary Sappho also wrote odes in the Pindaric style. This excerpt from “Ode to Aphrodite” showcases the lyrical style of the Pindaric ode.

"Deathless Aphrodite, throned in flowers,
Daughter of Zeus, O terrible enchantress,
With this sorrow, with this anguish, break my spirit
Lady, not longer!

Hear anew the voice! O hear and listen!
Come, as in that island dawn thou camest,
Billowing in thy yoked car to Sappho
Forth from thy Father's

Odes have a life far beyond ancient Greece. “Ode: Intimations of Immortality from Recollections of Early Childhood” by William Wordsworth is a good example of a more modern poem in Pindaric style.

"There was a time when meadow, grove, and stream,
The earth, and every common sight
To me did seem
Apparelled in celestial light,
The glory and the freshness of a dream.
It is not now as it hath been of yore;
Turn wheresoe'er I may,
By night or day,
The things which I have seen I now can see no more."

The Horatian ode was named after the 1st century B.C. Roman lyric poet, Horace. It comes from the Latin tradition of the Aeolic ode and typically has a calm and contemplative tone, in contrast to the more ceremonial Pindaric ode. Horatian odes tend to be simple, reflecting on nature, people or abstract concepts. They usually have a regular stanza pattern — typically 2-4 lines — length and rhyme scheme.

This excerpt from “Ode to the Confederate Dead” by Allen Tate demonstrates the structure of a Horatian ode.

"Row after row with strict impunity
The headstones yield their names to the element,
The wind whirrs without recollection;
In the riven troughs the splayed leaves
Pile up, of nature the casual sacrament
To the seasonal eternity of death;
Then driven by the fierce scrutiny
Of heaven to their election in the vast breath,
They sough the rumour of mortality."

Another example comes from the creator of the Horatian ode himself, Horace. This excerpt from “The Ship of State” demonstrates the rhyme scheme and metric structure that Horace used in his odes.

"O ship the fresh tide carries back to sea again.
Where are you going! Quickly, run for harbour.
Can’t you see how your sides
have been stripped bare of oars,

how your shattered masts and yards are groaning loudly
in the swift south-westerly, and bare of rigging,
your hull can scarce tolerate
the overpowering waters?"

As the name suggests, an irregular ode does not conform to the structures of either the Pindaric or Horatian ode. However, an irregular ode will retain some of the elements of a classic ode, such as tone and subject, while enjoying the freedom to experiment with rhyming and structure. Typically, the verse is irregular and stanzas are not in a particular order. Additionally, there is no formal rhyme scheme and irregular odes tend to be more experimental.

This excerpt of British poet Percy Bysshe Shelley's “Ode to the West Wind” demonstrates how an irregular ode can be structured.

"O wild West Wind, thou breath of Autumn's being,
Thou, from whose unseen presence the leaves dead
Are driven, like ghosts from an enchanter fleeing,

Yellow, and black, and pale, and hectic red,
Pestilence-stricken multitudes: O thou,
Who chariotest to their dark wintry bed

The winged seeds, where they lie cold and low,
Each like a corpse within its grave, until
Thine azure sister of the Spring shall blow

Her clarion o'er the dreaming earth, and fill
(Driving sweet buds like flocks to feed in air)
With living hues and odours plain and hill:

Shelley’s fellow Romantic poet John Keats favored the ode, as demonstrated in his "Ode to a Grecian Urn."

"Thou still unravish'd bride of quietness,
Thou foster-child of silence and slow time,
Sylvan historian, who canst thus express
A flowery tale more sweetly than our rhyme:
What leaf-fring'd legend haunts about thy shape
Of deities or mortals, or of both,
In Tempe or the dales of Arcady?
What men or gods are these? What maidens loth?
What mad pursuit? What struggle to escape?
What pipes and timbrels? What wild ecstasy?"

Poetry is one of the truest forms of self-expression and can inspire a lifelong love affair with the beauty of words. If you'd like to dive deeper into poetic waters, explore some of these articles on different types of poetry.