Political Quotes That Are Refreshingly Real 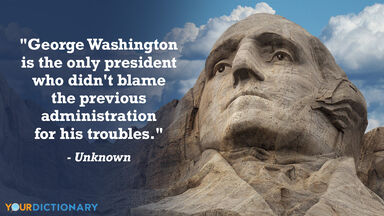 Politics is no laughing matter, but a lot of the top political quotes that have been uttered over the centuries are quite funny. Some of these funny quotes are from comedians and other entertainers, while others are from real-world political leaders.

Quotes About Politics, Government and Leadership

Moving on to the more serious side of politics, review a selection of interesting and insightful quotes about the world of government and politics, both of which represent key aspects of societal leadership.

Quotes on Political Participation and Change

A lot of political discourse focuses on the importance of participating in the political process if you want to see change. The quotes below are words of wisdom that relate to the topics of political participation and governmental change, both as individual topics and in terms of where they overlap.

Politics isn't all fun and games, or even change and participation. There's an ugly side to the business of politics. Discover some quotes about the dark side of political life and the political process, which is often referred to as bad politics or dirty politics.

Take a Deeper Dive Into Government and Politics

Now that you've reviewed some quotes about government, maybe you're feeling inspired to get involved with the political process. Start by learning more about the different types of government around the world. Then, develop a strong sense of digital literacy. That will help you combat misinformation and fake news that keeps people from being well-informed about important political issues of the day. If you just want more quotes, check out some noteworthy words from former U.S. president Thomas Jefferson.