Has someone ever said something to you that rubbed you the wrong way? Meanwhile, they’re wondering why you’ve taken such offense to something they casually said. Well, words matter. And the words we choose in our everyday speech and writing is a reflection of our thoughts.

Connotation is an idea or feeling that a word evokes. If something has a positive connotation, it will evoke warm feelings. Meanwhile, something with a negative connotation will make someone feel less than pleasant. To call someone “verbose” when you want to say they’re a “great conversationalist” may not convey that. Your tone could imply they talk too much or that they’re lovely to be around. In the positive and negative connotation example sentences below, you’ll be able to take a look at both sides of the coin. 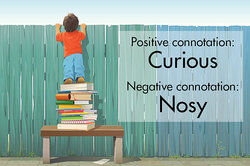 Difference Between a Positive and Negative Connotation

Words can cut or they can empower you. Imagine the tone in the delivery in the sentences below. Some will come off as rude or snobbish. Others will appear to be well-spoken and gentle. The connotation of certain words will affect not only how you feel about what’s being said, but also how you feel about the person using the words.

These pairs of positive and negative sentences will show you how words that are actually synonyms for each other can come across as warm, neutral, or very cold.

Positive: My new neighbor is a mature woman.

Negative: My new neighbor is an elderly woman.

Positive: Before he makes any purchases, Billy likes to do his research; he’s very economical.

Negative: Before he makes any purchases, Billy likes to do his research; he’s so cheap.

When we think of someone economical, we tend to consider them to be logical and wise. Meanwhile, cheap is a derogatory term for someone stingy.

Take a look at Connotative Words: Examples and Exercises. There, we review why connotation is so important, and demonstrate the positive, neutral and negative connotations of words.

Positive: Yesterday’s workout was a challenge.

For something to be a challenge, it’s not necessarily bad, you may actually enjoy it. But, a difficulty is usually unpleasant.

To call someone a great conversationalist is a compliment. If someone’s chatty, that tends toward “annoying.”

Every woman wants to feel pretty. Some like to be called “hot,” as well. However, that label can carry a more sexist undertone.

Positive: The more you work with him, the more you’ll find he’s a very determined man.

Negative: The more you work with him, the more you’ll find he’s a very stubborn man.

There’s not much wrong with being determined; it means you’re likely to get things done. To be labeled stubborn, however, is less than appealing.

Ready to see some of the literary greats use connotation to their advantage? Check out Connotation in Literature Examples and see how a single word can change the meaning of a sentence.

Positive: Is that what you’re reading? Your interests sure are unique.

Negative: Is that what you’re reading? Your interests sure are weird.

Uniqueness is a bit like prettiness; there’s nothing wrong with being special. Weird, however, carries a very negative undertone.

To be reserved means you’re a bit of an observer; that’s hardly a “dig” at someone. However, to be labeled timid means others probably think you’re too shy.

Laid Back vs. Lazy

Positive: He’s too laid back to clean the dust off the ceiling fan.

Negative: He’s too lazy to clean the dust off the ceiling fan.

Who doesn’t love a laid back, zen soul? To call someone lazy, though, means you don’t hold them in high regard; you dislike their lack of motivation.

Positive: That child is more than a little energetic.

Negative: That child is more than a little hyperactive.

Most children are energetic; that can be a lot of fun to be around. Anything with the “hyer” prefix, however, insinuates just a little bit too much.

Sort of like “determined,” a driven individual is inspiring. But, the moment someone crosses over into “pushy” is a recipe for disaster.

A curious mind is a beautiful thing; the learning never stops. But, for someone to call a child nosy, they’re clearly not pleased.

Positive: Let’s just say she’s a little more simple than others her age.

To be “simple” or “simple-minded,” probably means you’re very sweet, but not the smartest person in the room. To be labeled as flat out dumb is not only hurtful but deliberately insulting.

Who doesn’t love to be excited? It means something great is coming. To be anxious isn’t necessarily a bad thing, either. It just connotes a little bit of nervous energy; it’s not quite as appealing as pure excitement and joy.

Positive: You can always count on him to be assertive.

Negative: You can always count on him to be aggressive.

Much like a determined soul, an assertive person is going to take initiative and “get things done.” An aggressive person, however, is someone people flee from.

To have something reduced can be a good thing; there’s no telling. However, the moment something’s been slashed, it means it happened suddenly and dramatically.

Positive: At work and at home, she’s very confident.

Negative: At work and at home, she’s very egotistical.

Determined… assertive… confident. Each of these labels carries a positive connotation; they indicate a “go-getter.” However, once someone slips from confident to egotistical, they’re no longer an inspiration to be around.

Positive: Wow! I didn’t know he was so intelligent.

Negative: Wow! I didn’t know he was such a nerd.

To carry a mark of intelligence is a high compliment. Today, for the most part, “nerd” can be a term of endearment. But, there’s still a tinge of negativity to the word, as though the person’s not “cool.”

To compliment someone’s generosity is to offer high praise. If, however, you call their act of kindness extravagant, you’re telling them they went too far (and that’s hardly complimentary).

Everyone wants to know they’ve offered someone a good, fun time. If, however, someone hesitates slightly and uses the word “interesting” instead of “fun,” you should probably worry that something was amiss for them.

In your speech and writing, make the conscious decision to connotate your precise meaning. Every word has a definitive definition. That’s what’s known as denotation. There’s no room for interpretation. Meanwhile, other words have added connotations or innuendos. So it pays to think before you speak.

For more on word choice and the importance of saying what we mean, check out What’s the Difference Between Connotation and Denotation. It’s a great study on words as a whole and the power of language.