A pulley is one of the original simple machines. The pulley was possibly created by Archimedes in B.C. times. Its original use was to lift buckets of water. The term sheave can also be used to refer to a pulley. 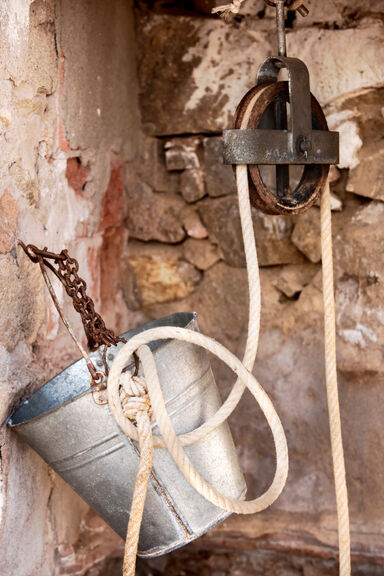 Bucket on a pulley system

The original primary use for pulleys was to make it easier to lift heavy items. The pulley is a simple machine made with a wheel and a rope, cord, or chain.

There are three types of pulleys:

Pulleys can be found everywhere to help make tasks easier. In addition to lifting things, pulleys can be used singly or with many pulleys working together in order to transport people or things. They can also be used to provide power from one shaft to another.

Examples of pulleys include:

In all of these examples, a cable system works in order to make lifting easier or to make moving items easier. Pulleys are essential to being able to move and lift very heavy or large items. The simple principle behind pulleys makes these one of the most effective tools in existence.