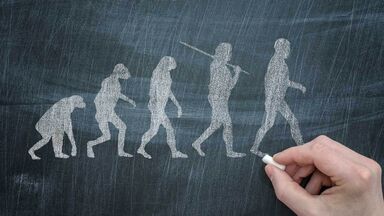 Punctuated equilibrium is a theory of evolution created by Stephen Jay Gould and Niles Eldredge in 1972. It stands in contrast to Charles Darwin's more dynamic model of evolution, which says evolutionary changes happen gradually.

Punctuated equilibrium states evolution only takes place in bursts of time that are rapid. However, the term "rapid," in evolutionary terms should be understood to mean approximately 500,000 years in some circumstances.

So for example, a species of sea animals lives, breeds and dies for thousands of years. Suddenly, the sea-level changes and the animals must adapt. Their bodies develop more blubber and thicker coats in order to accommodate the environmental change and from then on are evolutionarily different from their ancestors. The development of the blubber and thicker coats are adaptations made by the animals.

Prior to the change, which is often caused by an environmental factor, the life form's species or class lives in "stasis" or an unchanged state for many, many years because it does not have a need for change. Once the change happens, quite quickly, the species re-enters stasis with its new evolutionary adaptation. Therefore, the sea animals will continue on with blubber and thicker coats until another change is needed.

A species of birds exist in stasis for many thousands of years. Suddenly, bacteria cause their primary tree of sheltering choice to die. The birds must adapt within the environment to trees that are much higher, requiring more wing strength. Some birds die. The remaining birds' bodies adapt longer, stronger wings to survive. The strong birds survive meaning more are born until the others die out. The species returns to a state of stasis.

A species of worms live in the soil in a particular climate and is in a state of stasis. Climate changes cause the pH of the soil to change. The change in pH causes some worms to die, but those that survive adapt and reproduce with a new ability to withstand the pH change in the soil. The species returns to stasis.

Punctuated equilibrium can also happen because of gene mutations. For example, a cheetah species has no spots. However, due to a gene mutation, a cheetah cub is born with spots. Because this adaptation helps the cheetah to hide and survive, more cheetahs are born with spots. This continues until the spotless cheetahs are all replaced by spotted cheetahs. The species stays that way for many years.

Now that you’ve seen punctuated equilibrium in some made-up scenarios, check this out in the real world.

Some argue that the evolution of ape into man is actually a form of punctuated equilibrium as there are periods of no change (in stasis) and periods of what appears to be rapid and pronounced change.

In New Hampshire, there is a quarry in which the pattern of punctuated equilibrium has been noted in Trilobites. The fossils suggest a quick appearance of change between an older and more recent class called Phacops.

Fossils of Brachiopods show a "sudden transition" between the species Kutchithyris acutiplicata and K. euryptcha. The rapid transition can only be explained by a sudden need for evolutionary change.

A variety of dinosaurs including Stegoceras, Tyrannosaurus, Syracosaurs, and Lambeosaurus all show signs of punctuated equilibrium. This change aligns with environmental changes such as a sea-level change that might have caused a need for evolutionary adaptation.

For example, as an area loses trees, a species of black butterfly slowly starts turning grayer and grayer over a period of years to account for the lost shade so it can compete to stay alive.

So now you have seen examples and can better understand how punctuated equilibrium works. Keep up your quest for knowledge by learning more about evolution through examples.