When literature aficionados mention Thomas Hardy, they may remark upon his vivid descriptions of pastoral England and complex heroines who were ahead of their time. However, many quotes from Far from the Madding Crowd, Tess of the d’Urbervilles and other works of his stand on their own and offer powerful reflections on life, love and society that are still relevant today. 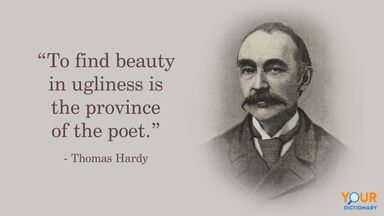 Thomas Hardy (1840-1928) was the son of a stonemason and grew up in Dorset, England, where many of his novels are set. He rose to prominence in 1874 with Far from the Madding Crowd and went on to write many other classic novels including Tess of the d’Urbervilles, The Mayor of Casterbridge and Jude the Obscure.

His novels are celebrated for their realistic, critical look at Victorian society and morality as well as the decline of the rural countryside in favor of larger, industrial cities. He was nominated for the Nobel Prize in Literature twice and was made a member of the Order of Merit in 1910. Hardy was also a famed poet who influenced the works of Ezra Pound, W. H. Auden and D. H. Lawrence.

Quotes From Tess of the d’Urbervilles

Tess of the d’Urbervilles deals with the tragic downfall of a young woman named Tess Durbeyfield after she learns that her family is descended from a noble family called the d’Urbervilles. The novel was controversial at the time of its publication because it challenged Victorian morality and hypocrisy, particularly in regard to the treatment of women. Many of the novel’s most iconic lines reflect these themes.

Quotes From Far from the Madding Crowd

Many of Hardy’s novels are characterized by tragedy, but Far from the Madding Crowd is a sweeping romance that tells the tale of Bathsheba Everdene and her three suitors as well as her quest for independence. Hardy’s stunning language and imagery make for some truly memorable love quotes.

Quotes From Other Hardy Novels

Thomas Hardy wrote many other novels that are full of beautiful and contemplative prose.

Hardy carried the key themes of nature and justice into his poetry to stunning results.

In addition to his prose and poetry, Thomas Hardy wrote many inspiring lines in his personal notebooks and letters.

Explore quotes from other great English language authors and orators.