Few people made as big an impact on the English language as Jonathan Swift, the author of Gulliver’s Travels and the satirical essay “A Modest Proposal” among many others. Over the course of his career, Swift wrote many influential works on a range of topics from politics to the human condition that are as relevant today as they were then. 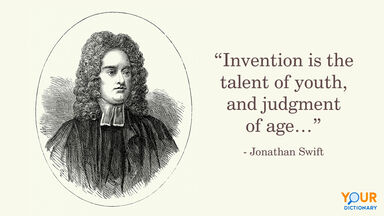 Jonathan Swift (1667-1745) was an Irish essayist, satirist and poet whom the Encyclopædia Britannica calls the “foremost prose satirist in the English language.” He published all of his works anonymously or under pseudonyms such as Lemuel Gulliver (the same name as his protagonist in Gulliver’s Travels), Isaac Bickerstaff and M.B. Draper.

Additionally, he lent his satirical voice to various political pamphlets and essays. His deadpan humor and biting style were ahead of their time and paved the way for future satirists. Swift was also an Anglican cleric who became the dean of St. Patrick’s Cathedral in Dublin. His religion and Irish nationality influenced many of his works, particularly those that addressed the treatment of the Irish people such as “A Modest Proposal.”

Jonathan Swift’s best-known literary work is Gulliver’s Travels into Several Remote Nations of the World, or Gulliver’s Travels for short. It is the tale of a man, Lemuel Gulliver, who travels across the globe and what he learns from his experiences. The novel satirizes everything from the “travelers’ tales” subgenre of literature that was popular at the time to human nature in general. Swift stated that he wrote Gulliver’s Travels "to vex the world rather than divert it.”

Thoughts on Various Subjects, Moral and Diverting is a compilation of numerous Jonathan Swift quotes on “various subjects” ranging from religion and philosophy to art and culture.

Jonathan Swift wrote many essays and other works under various pseudonyms. With so many great quotes, we couldn’t limit ourselves to just two books.

There are many figures in English literature and history who left behind legacies and words to remember. Explore some of them: