How many people can claim to be both a novelist and an aeronautical engineer? Nevil Shute was not only adept at both professions, but he also broke new ground in each field. His literary catalog includes diverse works such as the post-apocalyptic novel On the Beach and the sweeping historical romance A Town Like Alice. Regardless of genre, the common thread woven through his novels is the dignity of work and class barriers. As a man who had a lot to say on a variety of topics, he left behind many memorable and quotable works. 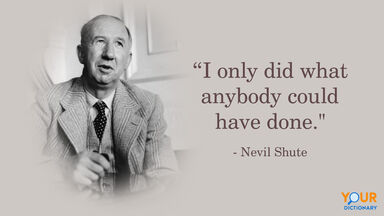 Nevil Shute Norway (1899-1960) was an English author and aeronautical engineer. Shute pursued his engineering career and eventually his own aircraft construction company, Airspeed Ltd., while consistently writing novels. He dropped the name Norway from his pen name in order to separate his work as a novelist from his day job. In 1946, Shute flew his own plane to Australia — eventually settling there in 1950 — and the setting and history of the continent played a pivotal role in many of his novels.

His writing style was to-the-point and stripped of pretense, favoring characters with strong morality and recognizable characterization juxtaposed with exciting, at times exotic or fantastical locations. Nevil Shute was described as a “friendly, nervous, tweedy man ... with the strong hands of an engineer'” by those who knew him, and he left behind an unparalleled legacy in the fields of air travel and the written word.

One of Shute’s best-known and loved novels is A Town Like Alice, which was published in 1950 when he had moved to Australia. It tells the story of an Englishwoman named Jean who falls in love with a prisoner of war and emigrates to Australia to be with him. The lovers attempt to build a life together in the post-war world and turn their small outback community into “a town like Alice.”

Quotes From On the Beach

Nevil Shute published On the Beach in 1957 toward the end of his life. The story details the lives of people in Melbourne as deadly radiation spreads across Australia following a nuclear war. As each person’s time comes, they confront death in their own way.

Quotes From Other Nevil Shute Novels

Nevil Shute wrote 24 novels including an autobiography, Slide Rule. He completed his first novel, Stephen Morris, in 1923, but it was published posthumously in 1961. Similarly, he completed Pilotage in 1924, but it was not published until after his death.

Nevil Shute is a remarkable example of an author who was not only a great writer but a great man who made an impact on multiple fields. These other wordsmiths also broke new ground and used their voices to make a difference.