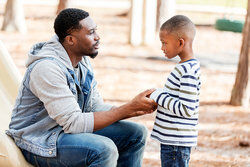 Father talking with his son
Advertisement

Imagine that your daughter played on her phone rather than cleaning the sink in the bathroom. As punishment, you make her clean not only the sink, but now the tub too.

Voila! You’ve just delivered positive punishment to your daughter by giving her more chores. The objective of punishment is to deter an undesirable behavior, which is playing on her phone in this case.

Positive punishment is just one behavior modifying technique used in by parents, teachers, employers and even dog trainers that is part of B.F. Skinner's operant conditioning paradigm.

Using examples is a great way to clear up any further confusion.

Examples of Positive Punishment at Work

A worker at a computer company is found surfing the internet during downtime rather than checking inventory. His boss calls him into his office and gives the worker a verbal scolding.

In this scenario, the boss is adding the punishment of the scolding. In the verbal reprimand, the boss might discuss policies and consequences that will happen if the employee is caught again. The worker will remember this scolding the next time they think to peruse the internet and hopefully won’t do it.

At a customer service center, a worker is found being rude to customers on the phone. The worker is then sent down to the HR department and given extra training on phone etiquette.

To positively punish the employee for their subpar work, the HR department is adding the mandatory training. The next time that the worker thinks about being rude with a customer, they will remember that boring training as a consequence and will refrain from being rude.

Examples of Positive Punishment in the Classroom

Teachers are typically actively enforcing positive punishment daily and you might not even realize it. Check out a few examples that might have even happened to you.

During a lecture, a student starts texting their friend secretly. The teacher sees the texting and gives the student detention for breaking the rule about no texting in class.

Here, the addition of the detention acts as the positive punishment. The teacher isn’t taking anything away from the student, but is rather forcing them to attend a half-hour detention to reflect on their behavior.

A student gets caught by a substitute teacher throwing various spit balls around the room. After class, the student must stay and clean up all the spit balls along with any other trash in the room.

The teacher is adding the punishment of cleaning the room, which the teen will see as very undesirable. This will be doubly undesirable because they will not only be cleaning up their mess but everyone else’s too.

Examples of Positive Punishment at Home

Positive punishment frequently happens at home, but this isn’t just between parents and children; it could be happening between roommates as well. Check out these fun examples.

Two roommates have chores that each must complete every week. When one roommate leaves the dishes piled in the sink and doesn’t complete their chore of loading the dishwasher, they must also do the laundry.

By adding the chore of doing the laundry, the roommates are giving each other the incentive to complete their own specific chores in a timely manner. When one fails, they get the added punishment of an additional chore.

A child steals a toy from a supermarket. The parent makes the child write a letter of apology and return the toy to the store.

The parent, in this example, is offering a positive punishment by making the child not only return the toy, but also write a letter of apology. Hopefully, in the future, the child will remember the embarrassment of both punishments if they think of stealing again.

Other Examples of Positive Punishment

Positive punishment is happening all around us. Find out how it happens with your dog or even by accident.

A dog jumps on an owner. The owner firmly says no.

Here the jumping (behavior for modification) is given the positive punishment of being told “no.” If the owner is consistent, the dog will start to realize that jumping gets them reprimanded and will stop the undesirable behavior.

A child touches a hot oven. The child gets a burn on their hand.

Because of the positive punishment of the burn, the child will think in the future before they touch a hot oven. While a person did not deliver the punishment, it still works to modify the behavior, and rather quickly.

A worker is running late to work and speeds through a construction zone. The worker is pulled over and given a ticket by a police officer.

The ticket is the positive punishment the worker receives for speeding. Since speeding through the construction zone can put lives in danger, the government hopes that the hefty fine will deter people from doing it in the future.

In the world of punishment, positive and negative aren’t about being good or bad. Instead, it is about giving and taking away.

For example, to negatively punish a child, you might take away their tablet for not going to bed on time. The taking away of the tablet is the negative punishment. Scolding the child instead would be an example of positive punishment.

Which Is More Effective?

While it would be nice to have a hard and fast rule on the better punishment, it truly depends on the situation and the person (or animal). In some situations, positive punishment might be more effective. For others, losing things might be what really changes their behavior.

Behavior modification can get confusing. When you start throwing around words like “positive punishment” and “negative reinforcement,” it can be hard to wrap your head around such concepts. However, it’s as easy as adding and subtracting. Now that you know about operant conditioning, you might be interested to explore how observational learning works through examples.