A form of circular reasoning, begging the question is one of the most common types of fallacies. It occurs when the premises that are meant to support an argument already assume that the conclusion is true. If you start from a place where the conclusion being argued is already assumed true, then you’re not really making an argument at all. There is no supporting evidence. 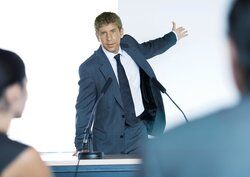 Speaker in front of microphones
Advertisement

To Beg the Question

The origin of the begging the question fallacy can be traced back to the Ancient Greek philosopher Aristotle. His original Greek writing was later translated to Latin, and one of the 13 fallacies listed in De Sophisticis Elenchis (Sophistical Refutations) was phrased as “petitio principii.”

More literally, this should have been translated as “assuming the initial point” or “assuming the conclusion.” The term was subsequently translated to English some time in the 16th century as "begging the question."

Technically speaking, to beg the question is not a logical fallacy. This is because it is logically valid, in the strictest sense, but it is utterly unpersuasive. The thing that you are trying to prove is already assumed to be true, so you are not actually adding anything to the argument. It would be like saying a product is the most expensive because it has the highest price.

Jane is an intelligent, insightful, well-educated and personable individual, which begs the question: why does she stay at that dead-end job?

That’s an example of raising the question because it is not a fallacy to ask that question. But what about situations where you’re actually begging the question? Here are several examples to help illustrate the concept.

Freedom of the Press

The important to note about fallacies like begging the question is that the argument they’re trying to make isn’t necessarily wrong; it’s just poorly constructed or supported. In this case, the second half of the sentence simply restates the first half in reverse order. It would be akin to saying that the Civic is a car made by Honda because Honda makes a car called the Civic.

I am confident that God exists because it says so in the Bible. And the Bible contains God’s word.

Destiny is real. Everything that happens to us has already been preordained, written in the stars. It explains the “chance” encounter that led to me meeting and marrying my future husband all those years ago.

The Apple iPhone is the best smartphone on the planet because no one makes a better smartphone than Apple does.

Like the freedom of the press example above, this example of begging question is simply restating the purported claim in a different way in an attempt to support that claim. In effect, this sentence is stating that the iPhone is the best because it’s better than all the others. This would be like saying something is the biggest because everything else is smaller.

Greatest of All Time

Avatar is the greatest movie ever made because it is the number one top grossing movie of all time.

Sometimes, begging the question can be fairly obvious. Other times, it might be more subtle. It’s true that the movie Avatar brought in over $2.7 billion globally. However, it’s not intrinsically true that the highest-earning movie is inherently the best movie. This argument starts with that assumption, and as a result, it is once again restating the claim as proof of its truth.

This granola bar is the healthiest thing you can eat because it’s made with all natural ingredients.

This example of begging the question follows the same form as the movie example above. It starts with the assumption that all natural ingredients are indicative of the healthiest food you can have.

Brain in a Vat

I know that everything I experience is real. I can touch it, smell it, see it, hear it and even taste it all myself.

One of the most famous thought experiments in philosophy is the brain in a vat. It posits that there is no way for you to know if your experiences are real because you could be nothing more than a brain in a vat. A sophisticated computer program then manipulates your brain to simulate lifelike experiences and you wouldn’t know the difference.

The example here illustrates begging the question because the speaker already assumes that their experiences are real. The evidence used to support the claim is that they can experience the world through the five senses, but it’s a circular argument. They can’t know for certain that sensory experience is “real.”

If the government just gets out of the way, everyone can be free to do the right thing themselves. After all, every day people are smart enough to make the right decisions on their own naturally and they should have the freedom to do so.

The fundamental argument being put forth here is that society would function better with less government intervention and restriction. Within that argument is the assumption that people will always do what is best, but that assumption is also being used to support the argument. As a result, the argument becomes an example of circular reasoning, begging the question. Why can we expect people to make the right decisions?

Whether you are writing an argumentative essay for school or simply engaging in a heated debate on Facebook, it’s important to present a sound argument in support of your claim. Begging the question is just one common fallacy. To ensure you are presenting the strongest case possible, you’ll also need to avoid other problems like ad hominem arguments and ignorance fallacies. Be convincing!