Every time you pick up the phone to call a friend, you're entering into the world of digraphs. A digraph is a combination of two letters that make a single sound, as in the "ph" in "phone." In fact, the word "digraph" contains a digraph. (Can you spot it?) Digraphs can include a combination of consonants or vowels. Let's take a look at several digraph examples, starting with consonants. 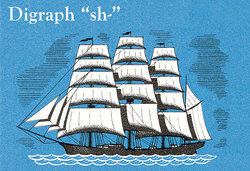 Digraphs can make initial sounds, and come at the beginning, middle, or end of the word. Below, we'll list each sound, including its use as an initial digraph and a final digraph.

Vowel digraphs are typically placed in the middle of words. Of course, that's not always the case, as we'll examine the "ea" digraph pairing that can come at the beginning of words like "each" and the end of words like "plea." But, since they don't predominantly deal in initial and final sounds, we'll list the vowel digraphs and then enjoy some examples.

Digraphs are often categorized alongside diphthongs. But, don't fall for this common mistake! Also known as digrams, digraphs consist of a pair of two letters. Diphthongs are sounds.

In fact, in Greek, "graph" means "written." Also in Greek, "phthong" means "sound." Diphthongs are interesting, though. They only deal with the sounds that vowels make. Meanwhile, digraphs deal with both vowels and consonants.

All this may make you wonder about consonant blends too. Here's another interesting difference. Digraphs are letters that come together to make one sound. Blends also contain pairings of letters, but each individual sound can be heard.

Actually, the word "blend" contains a blend. Notice the letters "B" and "L." They form an interesting sound, but each letter is distinctly pronounced. Another example would be the "S" and "N" in "snow." Meanwhile, the "S" and "H" in "show" is a digraph.