When creating an argument, you've probably heard the word ethos. But what exactly is ethos? It is the ethical perspective and authority you put into your work. Explore ethos examples in literature, movies and speeches to better understand the concept. 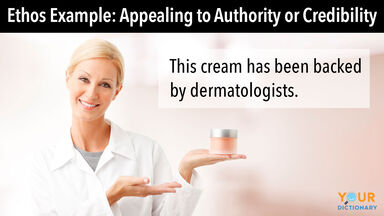 Do you have a strong set of ethics or a strict moral code? At some point in your life, you’ll likely come across a piece of writing or a speech that will appeal to your ethical perspective. When that happens, you’ll know the writer or speaker has employed the rhetorical device of ethos.

Ethos is an ethical appeal and appeals to your sense of right and wrong. It works to build authority with an audience. For example:

This cream has been backed by dermatologists.

This works to build ethos in advertising by showing the product's authority and quality. Let’s talk a little bit more about this mode of persuasion, then dive into several examples of ethos in action.

Is ethos a rhetorical device? Yes, it is. But before you can make an ethical appeal in your writing or speech, you need to build a few key things with an audience. Once these virtues are established, ethos can be very effective within your writing:

Let’s move from the intangible (ethics and emotions) to the tangible. We’ll take things to a more concrete level and enjoy some examples of ethos, starting with the written word.

To Kill a Mockingbird by Harper Lee

In To Kill a Mockingbird, Scout’s father, Atticus, is using ethos so blatantly, he might as well say, “Hey, jurors, find your ethics and make the right decision.” He’s calling each juror out on the carpet, reminding them that no one man is better than any other man in the courtroom or in society as a whole. This is an ethical ideal that Atticus preached and demonstrated in both his personal and private life.

"I’m no idealist to believe firmly in the integrity of our courts and in the jury system—that is no ideal to me, it is a living, working reality. Gentlemen, a court is no better than each man of you sitting before me on this jury. A court is only as sound as its jury, and a jury is only as sound as the men who make it up. I am confident that you gentlemen will review without passion the evidence you have heard, come to a decision, and restore this defendant to his family. In the name of God, do your duty."

East of Eden by John Steinbeck

John Steinbeck loved to write in the first person. He often became the narrator of this own novels. In East of Eden, he's appealing to people's sense of ethics regarding freedom and building his credibility as a narrator. He's standing firm in his resolve to fight against any ideal that limits the individual and is clearly making a case for others to follow.

"And this I believe: that the free, exploring mind of the individual human is the most valuable thing in the world. And this I would fight for: the freedom of the mind to take any direction it wishes, undirected. And this I must fight against: any idea, religion, or government which limits or destroys the individual."

Ethos isn't always an in-your-face point within literature. Sometimes, it's the steps that a writer takes to make a character believable that carry the ethos. For example, the slang that J.D. Salinger uses in his creation of Holden Caulfield creates his credibility as a rebellious 16-year-old. See this example where Holden's slang like "damn" makes him a reliable author.

Examples of Ethos in Movies

It’s hard to have a leading character if the entire audience isn’t captivated by him or her. As such, the leading man or woman in a movie must follow a strict code of ethics. Part of the suspense usually comes into play when those ethics are called into question in a pivotal moment. What will they choose? Let’s take a look at some examples of ethos in movies.

Albus Dumbledore in the Goblet of Fire

When you talk about ethos and trustworthiness in a character, you can't look any farther than Albus Dumbledore in the Harry Potter series. Not only is he the headmaster of Hogwarts, but his respect in the wizarding world is unmatched. Albus's speech after Cedric's death works to exemplify this since he goes against the Ministry of Magic to share the truth with his students.

Albus Dumbledore: "I think therefore you have the right to know exactly how he died. You see Cedric Diggory was murdered by Lord Voldemort. The Ministry of Magic does not wish me to tell you this. But I think to do so would be an insult to his memory."

The 2018 film Black Panther is the highest-grossing superhero movie of all time in the United States. When establishing ethos and authority, the main character embodies both. Not only is he a king, but he cares about his people. He's a good person and being the right kind of king is important to him. Get a sense of his ethos through this beautiful line by T'Chaka to T'Challa.

T'Chaka: "You are a good man with a good heart, and it is hard for a good man to be king."

Eye in the Sky

It turns out Helen Mirren can play the Queen of England and a British army colonel. In Eye in the Sky, Mirren's character orders a drone strike to take out a group of terrorists in Kenya. However, moral judgments come into play when a woman enters the kill zone. Is one person's life worth the payoff that comes with the extinction of a terrorist cell? Plenty of characters in the film lean on their sense of ethos to make their case for and against the drone strike. The ethos of the characters Watts and Powell is hard to miss.

It’s no secret a politician must be a master persuader. They have to earn the confidence of legions of people across a city or town, or even across a nation. One of the best ways to do that is to align their ethical code with the people they’re trying to elicit votes from. Let’s take a look at powerful orators who apply ethos to their speeches.

In his speech in 2012, Barack Obama couldn’t be any more transparent in his use of ethos. He begins his speech by setting down his authority as a president and clarifying what he's learned. You can see this through the excerpt.

"Now, the first time I addressed this convention, in 2004, I was a younger man — (laughter) — a Senate candidate from Illinois who spoke about hope, not blind optimism, not wishful thinking but hope in the face of difficulty, hope in the face of uncertainty, that dogged faith in the future which has pushed this nation forward even when the odds are great, even when the road is long.

Eight years later that hope has been tested by the cost of war, by one of the worst economic crises in history and by political gridlock that's left us wondering whether it's still even possible to tackle the challenges of our time. I know campaigns can seem small, even silly sometimes."

In Ronald Reagan's farewell address to the nation in 1989, he made an appeal using ethos. It's one thing to make a statement that knocks on morality's door. It's another thing to make a sound argument, relying heavily upon the people's moral code.

Few things in life are more important than freedom. It's the foundation upon which America was built. Before he left the Oval Office, Reagan made one final appeal. He encouraged government leaders not to overstep their bounds because, if they did, it would be detrimental to the people's right to liberty.

“I hope we once again have reminded people that man is not free unless government is limited. There's a clear cause and effect here that is as neat and predictable as a law of physics: As government expands, liberty contracts.”

Another great who was able to effectively use ethos in his speeches was Winston Churchill. In his 1941 address to the joint session, he establishes his credibility as a speaker. He shows the audience what he shares with common people. This excerpt works well to demonstrate his moral values.

"I may confess, however, that I do not feel quite like a fish out of water in a legislative assembly where English is spoken. I am a child of the House of Commons. I was brought up in my father's house to believe in democracy. 'Trust the people.' That was his message. I used to see him cheered at meetings and in the streets by crowds of workingmen way back in those aristocratic Victorian days when as Disraeli said 'the world was for the few, and for the very few.'"

The great philosopher Aristotle divided the act of persuasion into three realms: ethos, logos, and pathos. When attempting to persuade someone, either in written or oral form, you might want to appeal to their ethics (ethos), logic (logos) or emotion (pathos). Any approach may prove successful, but that depends on your intent and audience.

Although Aristotle’s preferred method of persuasion was logos (logic), he wasn’t completely opposed to ethos (ethics). He was, however, averse to pathos (emotion). He said, “The arousing of prejudice, pity, anger, and similar emotions has nothing to do with the essential facts.”

To call someone’s moral code into question is tricky terrain. You never want to launch into an ad hominem attack and pretend to know the inner workings of someone else’s mind. Perhaps that’s why Aristotle was a fan of cold, hard, scholarly facts.

Do You Have East of Eden Ethos?

Sure you do. We all have some sort of code we live by. That’s why it’s a great rhetorical device. Whenever writers can reach through the pages and tug at the audience’s sense of right and wrong, they stand a chance of securing a faithful following. Interested to see how else you can hook readers into your work? Scan through these examples of rhetorical devices. Maybe you’ll pair a little hyperbole with your ethos and see how the audience responds!