When you think of story setting, you might think of The Plaza Hotel in New York City or a major city like Seattle, Washington. But, examples of a good story setting reveal it's much more than just a physical location. 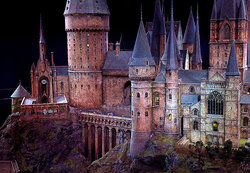 The setting impacts the direction of a story and works with other elements, including character development and mood. Together, let's take a closer look at the setting's direct impact on popular works of fiction.

When describing a setting, the author is telling readers what to expect. Let's take a look at the manner in which famous writers presented the setting in their stories.

Think of the magical, fantastical setting in which the Harry Potter series is set. Let's focus on Hogwarts School of Witchcraft alone. Its majesty stands in stark contrast to the tiny little alcove under the stairs where Harry was forced to live with his aunt and uncle.

As we read, we shift gears from a boring suburban home to animated portraits that talk, stairways that move through magic, and a wealth of hidden rooms bedecked with treasures. This is a great example of setting because, as we watch Harry advance from horribly confined conditions to an outright castle, we know something huge (and magical) is about to happen.

Let's go directly to the source on this one. Take a look at the manner in which Dickens describes London. We quickly learn it's a bustling, vibrant city, full of opportunity:

The public-houses, with gas-lights burning inside, were already open. By degrees, other shops began to be unclosed, and a few scattered people were met with. Then, came straggling groups of labourers going to their work; then, men and women with fish-baskets on their heads; donkey-carts laden with vegetables; chaise-carts filled with livestock or whole carcasses of meat; milk-women with pails; an unbroken concourse of people trudging out with various supplies to the eastern suburbs of the town. As they approached the City, the noise and traffic gradually increased; when they threaded the streets between Shoreditch and Smithfield, it had swelled into a roar of sound and bustle.

Middle Earth in The Lord of the Rings

You don't have to go far to find a Lord of the Rings fan. It's one of J.R.R. Tolkien's finest works, filled with fantasy and wonder. In this epic series, Tolkien uses the setting to predict a sequence of events. As Frodo and his friends travel further away from the Shire and into Middle Earth, they encounter danger upon danger.

Think of the Misty Mountains they tried to cross. There, they were met with heavy snowfalls and scary attacks from mountain dwellers known as "wargs." To escape the wargs, Frodo and his friends attempt to move through the Mines of Moria, an underground pass, which presents its own set of dangers.

As the story unfolds, the setting changes, and each shift in setting is indicative of the trials (or triumphs) that Frodo and his pals experience.

Ireland In The Dark Witch

Let's explore another snippet of text from a fictional work. This one was written by Nora Roberts and it explores the majesty of Ireland:

The cold carved bone deep, fueled by the lash of the wind, iced by the drowning rain gushing from a bloated sky. Such was Iona's welcome to Ireland. She loved it. How could she not? she asked herself as she hugged her arms to her chest and drank in the wild, soggy view from her window. She was standing in a castle. She'd sleep in a castle that night. An honest-to-God castle in the heart of the west.

This is an interesting use of setting. You'd think a bloated sky impregnated with lashing winds would set the mood for a dismal affair. It's quite the opposite, though. The main character, Iona, is filled with anticipation and hope despite the weather conditions. She was standing in a castle and was excited to be there.

In this novel, the setting (Ireland) goes on to become the seventh main character. It's filled with mystery and magic. It tells the stories of old, through its ancient ruins and mysterious woods. This is the power of setting. It not only tells us how the characters are feeling, it also sets the mood and steps in as another powerful main character.

Read these three little excerpts. See what they tell you about the character. Likewise, sense what kind of mood these settings evoke:

Here, we learn a few things. First, the main character is determined. She doesn't give up on that heavy door. Second, she's happy. The mood is immediately set when someone considers happily rolling down a plush, green hill.

Her hand reached for the massive, iron door handle. She struggled to pull it toward her. A sapphire studded the top of the handle and, as she slowly made progress on the door, a slash of light popped through. It warmed her face and made her smile, giving her enough energy to heave the massive hunk of wood open wide enough to slip through.

The way the door decisively slammed behind her should've frightened her. Instead, she looked upon spans of green, rolling hills bedecked with colorful poppies and tiny thatched-roof cottages. She debated between rolling down the plush hill at her feet or lifting straight off the ground and flying into the tiny village below.

A filthy home filmed in grime and broken glass rarely evokes hope. Indeed, we learn here that the main character is desolate and faithless. He's lost someone and knows there's no way to get her back. An "ugly creature" squaks at him in his misery, letting readers know conditions are about as bleak as they can get.

Dust coated every last surface. He ran his finger across the rows of books, the span of tables, and the wide window frames. It came up black. A fast-winged crow clipped past his ear and he wondered which broken window the ugly creature entered through. As it perched atop a broken spray of glass and squaked at him, he realized he'd never find her again. He was every bit as broken as the tired home, filmed in faithlessness.

Is there anything a glass of lemonade and a warm cookie can't fix? Clearly this main character is filled with anticipation and hope. The setting features a patio table stocked with the world's favorite foods and bright, cheerful color. Readers can immediately detect that something wonderful is about to happen.

The lime green patio umbrella flapped happily in the breeze. It covered strawberry slushies, watermelon pies, and bright, cheerful stacks of donuts. Emily stepped outside to feature a crystal pitcher of pink lemonade and a spray of warm cookies in the center of the table. She had on her favorite summer dress and knew that, as soon as he stepped through that patio gate, her life would never be the same again.

The setting is the period of time and geographic location in which a story takes place. It immediately sets the stage for what's to come.

If we're meeting a character in Germany, post-World War II, she's probably going to feel quite somber (at least initially). That character could still be horrified by the acts of Hitler. In addition to this, she's also going to face financial woes, given the ravaged economic state.

If we meet a character who just walked out of her brand new townhouse in Boston, she's likely to feel happy and optimistic. If she's strolling down a flower-lined walkway to her car, it'll be apparent things are bright and cheery in her world.

The setting of a story is just as important as the main characters. It tells readers something about them without using any dialogue. Characterization helps writers develop their favorite fictional people, too. Check out how to reveal a character's personality through these Examples of Characterization.

The setting in fiction also has the ability to set the mood. The mood describes how a person feels at any given time. It also reveals the atmosphere of the people, places, or time periods.

If we read a story set in 17th-century Scotland, conditions are bound to be a bit tougher than someone living in a plush penthouse in 21st-century Manhattan. The mood in Scotland might be serious, focused on back-breaking labor on the farm. Conversations may also carry a serious undertone around a fire in a dimly-lit room.

Meanwhile, the mood in Manhattan might be light-hearted, focused on shopping sprees and dry martinis. A plush penthouse will evoke feelings of comfort and luxury. Compared to Scotland, this setting would contain fancy bottled water and $500 face creams, evoking quite a different feeling in both the characters and the readers.

For more on how to paint the mood, check out these Mood Examples in literature.

As you consider the adventures your main characters are about to embark upon, take careful note of how you paint your setting. You can tell readers a lot about your characters' mental states with a glimmer from a shard of glass or a gush of wind from a bloated sky.

Go ahead and consider the setting of your story to be another main character. Let it carry the tale as the events unfold. To help your story take shape, check out Plot of a Story Examples. It'll walk you through the five elements of the plot: introduction, rising action, climax, falling action, and resolution.