Idioms are neat little expressions that may not always make literal sense but are commonly understood by people in the culture where they are used. In the English language, there are many common idioms about time. Whatever time-related messages you want to relay, these idioms will make it fun. 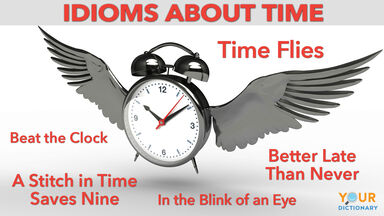 Idioms About Making the Most of Time

Some time idioms are phrases focused on taking steps to make the best possible use of your time.

A Stitch in Time Saves Nine

This proverb means that one should make a little effort now to fix something small before it gets larger and becomes more of a problem.

Example: You should fix the leak now before it causes more damage. Remember, a stitch in time saves nine.

Something that has good timing occurs at a fortuitous time. It can lead to one being able to capitalize on a timely opportunity.

Example: It's good timing that you applied for a job today, our cashier just turned in her notice.

Example: To save time, we took the toll road to the conference.

This time phrase is used to refer to how very valuable time really is.

Example: Appreciate what you have in front of you right now. After all, time is precious.

Time Is on My Side

This expression is used when one has plenty of time to complete a task or accomplish a goal.

Example: I have already completed the research for my term paper, so time is on my side.

Some idioms are phrases that focus on getting things done within a deadline or otherwise accomplishing results within a short period of time.

When you are rushing to get something completed in a small amount of time, that means you are working against the clock.

Example: She was working against the clock to get her report done by the end of the day.

At a Set Time

This phrase refers to doing something at a specific time that has been agreed upon.

Example: They agreed to meet at a set time so that there would be no confusion.

This idiom refers to doing something before the available or allocated time is up.

Example: He just beat the clock and got the article to print before six o'clock.

This idiom is used to acknowledge that something wasn't completed done in a timely manner but points out that at least it was ultimately taken care of. The idea is that late completion is better than just not doing it at all.

Example: Sorry I missed dinner! At least I got here in time for dessert. It's better late than never.

In the Nick of Time

Example: We got to the movie theater in the nick of time. The previews were finished but we didn't miss the beginning of the movie.

Idioms About Particular Points in Time

Some time idioms refer to a particular point in time by the use of a phrase rather than a specific time.

This idiom refers to very early in the morning.

Example: She gets up at the crack of dawn every day to take the dog for a walk.

This phrase refers to having something happen at the very last minute.

Example: He had to cancel his trip at the eleventh hour, but still got a refund.

This phrase describes something happening at an exact time.

Example: He arrived at the interview on the dot.

Once in a Blue Moon

This phrase refers to something that happens very rarely.

Example: I will go to the club once in a blue moon to make my friends happy.

Idioms About The Passage of Time

Some idioms focus on describing how time passes. Whether something seems to happen very fast or if it seems to take forever for time to pass, there's an idiom to describe what you want to express.

In the Blink of an Eye

This idiom is used to indicate that something seems to have happened very quickly.

Example: In the blink of an eye, he was off to college. Where has my baby gone?

When a person is doing something as a way to pass the time, this idiom is the perfect way to describe their actions.

Example: We were killing time by singing silly songs until all the party guests arrived.

This idiom refers to the fast, regular passage of time.

Example: Every day seems to be gone faster than the one before. Time is slipping by like sand through an hourglass.

This phrase is used to express that time passes by quickly.

Example: The kids were sad the party was over, but time flies when you are having fun.

Some idioms about times refer to things that happen multiple times.

This idiom can be used to describe something that happens regularly, either in predictable intervals or on a regular schedule.

Example: The mail carrier is like clockwork, arriving at our house at noon every day.

When something takes place repeatedly, it can be described using this idiom about time.

Example: I have told him time after time to clean his room!

Set a Clock to It

This idiom refers to something that happens at the same time so often that one could use the event to tell what time it is.

Example: My dog jumps on my office chair at 4 p.m. every day; you could set a clock to it.

There are many other time idioms and time phrases that can be used to convey meaning in a figurative way.

Something behind the times is old-fashioned or out-of-date.

Example: We still have cable TV in my house. My parents are so behind the times.

This phrase refers to serving a prison sentence. One who is in prison is said to be "doing time."

Example: He had to do time after getting caught breaking into someone's home.

Too Much Time on One's Hands

This phrase is used to indicate that someone must not have enough to do to keep themselves occupied.

Example: My sister folded her socks and underwear. I think she has too much time on her hands.

This phrase about time is used to express that someone could go back to the past and relive what has already occurred.

Example: I wish I could turn back time and redo my senior year of high school.

This phrase refers to spending time doing something that serves no purpose.

Example: You are just wasting time with this rambling excuse.

Whale of a Time

This expression indicates that you are having a great time or are doing something that is really fun.

Example: We had a whale of a time on our trip to Disney World.

Idioms are often used to express concepts of time. Whether you want to make a witty statement about time or are looking for a quick way to get your idea across, there are a wide variety of idioms to match your needs. Now that you're familiar with these time idioms, expand your vocabulary with even more figures of speech. Start by exploring a variety of common idioms and what they mean. From there, investigate some examples of idioms about money.