An example would be, “Shannon will have been gardening for three years by then.” Not only are we speaking about the future, and Shannon’s gardening, but it seems to be a continuous affair. Let’s take a closer look at this perfect, ongoing affair. 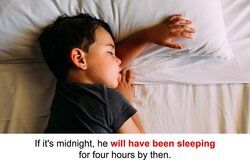 So, now we know future perfect progressive tense verbs contain will + have been + verb (ending in -ing). They’re indicating something that will happen in the future. And that “something” will be an ongoing occurrence. For example, “By that time, she will have been working here for two years.”

From the perspective of the future, we’re talking about the past, which is still the future to us here in the present. It sounds complicated, but we say things like this quite often. We might say, “By 3031, aliens will have been ruling our planet for 50 years.”

What’s interesting about the future perfect progressive tense is that those -ing verbs will almost always be action verbs, not stative verbs. That is, they’ll largely be verbs carrying out a specific action, not a feeling or something intangible.

For example, it would be rare - although not implausible - to see something like, “She will have been feeling sad for two years.” Typically, perfect progressive tense verbs are paired up with verbs expressing some sort of action.

Although the label for these verbs is quite a mouthful, you’ll find the concept is rather simple. Things stay the same with this tense. To indicate something happening continuously in the future, make use of will + have been + verb (ending in -ing). Let’s have fun with some examples.

Used in a Question

The above examples indicate statements made as declarative sentences. That is, they’re simply making a statement or, perhaps, answering a question. But, the future perfect progressive tense may also be used to pose a question. The formula for these is will + subject + have been + verb (ending in -ing). Here are three examples:

The future perfect progressive tense may also be used in the negative form to indicate a continuous action will not be happening in the future. The formula will read will + not + have been + verb (ending in -ing). Here are three examples:

You can see why verbs are not only essential, but multi-faceted. They have tremendous power over our understanding of a particular sentence. For more on this important part of speech, take a look at these categories of English verb tenses.