The future progressive tense, also known as the future continuous tense, is used to indicate a future event that will be ongoing (or “progressive”). This construct requires the use of “to be,” as well as the verb with an -ing ending. It follows a general formula of will + to be + verb (ending in -ing).

For example, “The children will be walking to school.” You can see how “will be” tells us that this is a future event, and “walking” here indicates a continuous event. Let’s take a look at a few more future progressive tense examples. 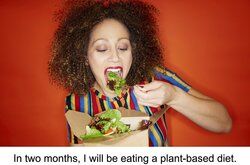 Let’s think about simple future tense. It follows a straightforward, generally singular prediction into the future. For example, “I will meditate tomorrow morning.” Future progressive tense serves to extend a futuristic activity. So, “I will meditate” (single instance) becomes, “I will be meditating every morning” (continuous activity).

Used in a Question

Each of the examples above indicate statements that are declarative sentences. That is, they’re simply making a statement or, perhaps, answering a question. But, the future progressive tense may also be used to pose a question. The formula for these is will + subject + be + verb (ending in -ing). Here are two examples:

The future progressive tense may also be used in the negative form to indicate a continuous action will not be happening in the future. The formula will read will + not + be + verb (ending in -ing). Here are two examples:

Verbs aren’t easy. They revolve around that sticky word: conjugation. No matter what language you’re learning, it’s the hardest part of the process. Sometimes, it takes rote memorization and practice; other times, it just takes a little bit of study time.

Seeing examples always helps, though. For more on this practice, check out How to Conjugate Progressive Verb Tenses. It’ll help bring it all together.