Plot of a Story Examples

The plot is, arguably, the most important element of a story. It is literally the sequence of events and, in that sequence, we learn more about the characters, the setting, and the moral of the story. 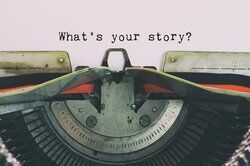 Plot of a Story Examples

In a way, the plot is the trunk from which all the other elements of a story grow. Let's explore how the plot of a story unfolds. We'll see how you can formulate your own plot points and enjoy some examples from literary giants.

Elements of a Story's Plot

Even though the plot is, essentially, the events that take place in a story, there is a specific plot structure that most stories follow. In fact, there are five main plot elements to be aware of. With these elements in mind, you stand on the precipice of fantastic story formation.

This is the start of the story, where we meet the main character or characters, understand the setting, and deduce the conflict.

For example, we might meet a main character, named Fiona, who just moved to Ireland, and is writing her first book. There, we meet the main character, understand she's in a new country, and will watch her push to overcome the trials and tribulations that come from each of these new elements.

In the rising action, we watch a series of events unfold. There's not much in a story if everything works out perfectly and there are zero bumps in the road. We need a little conflict.

Conflict can come in many forms. Continuing with Fiona, perhaps she's battling some sort of internal conflict. We might see her doubt her decision to move so far away from home. Or, with regard to her book, perhaps she submits it to her agent and it's torn to shreds.

Maybe she meets some devilish Irish lad who distracts her from her primary purpose and she must realign her priorities. The possibilities for action - and conflict - are endless.

The climax of a story is the peak of the action. At this point, we've watched the main character confront the action or conflict, and now something major has to come to a head.

Perhaps Fiona makes a new acquaintance who takes on a motherly role, reducing those feelings of doubt about moving so far away from home. Perhaps she submits the revised version of her book and it's accepted. Maybe she tells the devilish lad she's not interested so she can focus on her work.

Just as there are many avenues for action and conflict, there are many ways to bring a story to a climax. This will be the moment that stirs up the strongest sense of emotion in the reader.

In the falling action, we see things start to wind down.

Fiona and her new motherly acquaintance might have settled into a steady rhythm of Sunday dinners by now. As for her book, maybe the only thing she's waiting for is the advanced copy. Perhaps the devilish lad has come back around and they're in a steady relationship.

In any story, it's important to conclude with a solid resolution, sometimes called the denouement. Here, we learn of the final outcome of the tale. Short stories, in particular, need a defined ending. Books, however, can remain somewhat open-ended. But, you must bring the story to a close with either a tragic or a happy ending.

Perhaps Fiona is purchasing a crumbling mansion in Ireland with the royalties from her book. Or, maybe she'll move back to her home country, cherishing her Irish adventure for what it was. Either way, readers want to experience some sort of finite conclusion, or resolution.

Below, you'll find a downloadable PDF document that you can print off, either for yourself or for your students. The "story tree" is a great way to visualize the different elements of a story's plot. Refer to this guide for Adobe printables for additional help with downloading the file.

To get a sense of what a particularly strong plot of a story looks like, consider these exceptional examples.

J.K. Rowling is a master plotter. In her Harry Potter series, we meet Harry and, soon thereafter, two characters who go on to become his closest friends. Once the introduction is established, we learn of Harry's quest to secure the Sorcerer's Stone.

As for the conflict, Professor Snape is also after the Stone. In a climactic moment, Harry and his friends defeat an evil troll released by Professor Snape. Although resolution is achieved when Harry secures the Stone, the series is able to continue on with six more books.

In this classic by Charlotte Brontë, we meet Jane straight away. Her backstory is established as an orphaned girl who attends a treacherous boarding school. Immediately, we discern she's a very strong character. As for the rising action, we watch Jane go on to become governess, or teacher, at a great manor in England. There, she meets and falls in love with Mr. Rochester.

For the climax, just as they're about to wed, Jane learns about Mr. Rochester's first wife, who's still alive, albeit imprisoned due to her insanity. In the falling action, Jane moves away and we watch her settle into her new life with her cousins. The story comes to a "happily ever after" resolution when Jane and Mr. Rochester reunite and are able to marry, once and for all.

In The Hunger Games by Suzanne Collins, we meet Katniss Everdeen. The rising action is introduced when we see she's tasked with representing her district in the games. As such, she will face a series of difficult battles.

These battles reach their climax when Katniss is tied in the competition with one of the other representatives from another district. They decide to kill themselves rather than kill each other. The falling action and resolution take place when we see that the officials don't want that to happen and instead declare them both victorious.

As you begin your journey to greatness, learn how to set a story within a story or enjoy these tips on writing a bestseller.