Memoirs don't have to be novels with 100-plus pages. These unique musings based on memory can come in a short or small package. Mini memoirs give us a look into an experience through fewer words. Explore examples of famous short memoir examples, including some that are as short as just six words! 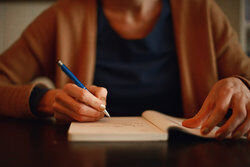 Flash, mini, micro, short, and even essay are just a few of the words that you will find attached to short memoirs. Like their novel length counterpart, short memoirs are personal accounts of someone's life or experiences.

However, unlike normal memoirs, short memories are just a sneak peek into a moment. They can come in the super short variety of six words like you find on the Six-Word Memoirs website. Some might be short novels. Others are a short essay of no more than 100 words.

On average, you'll find that most flash memoirs can run between 1,000 and 5,000 words. Short memoirs might be mini, but they pack a powerful punch. You can find them in magazines, online posts and in short novels. Explore several famous memoir examples along with funny, inspirational and sad memoirs.

From small novels to short essays, many famous writers have written micro memoirs that explore different aspects of their lives. These powerful memoir examples make you think. Not only do they give you a look into the writer's life but leave a lasting message for readers.

Notes of a Native Son by James Baldwin

He was, I think, very handsome. I gather this from photographs and from my own memories of him, dressed in his Sunday best and on his way to preach a sermon somewhere, when I was little. Handsome, proud, and ingrown, "like a toenail," somebody said.

In this short novel memoir, James Baldwin shows what it was like growing up with his dying father. In the excerpt, he paints a picture of his strained relationship. He also highlights his experience with Jim Crow laws.

The Price of Black Ambition by Roxane Gay

On the bus ride home, I stuffed my shame between the dry, cracked leather of the seat and assumed the matter had been dealt with. The driver, a zealous sort, found my crumpled failure and handed it to my mother when he dropped me off the next day. She was not pleased. I was not pleased with her displeasure. I never wanted to experience that feeling again. I vowed to be better. I vowed to be the best.

Featured in The Virginia Quarterly Review online, this mini famous short memoir talks about the growth of Gay's ambition and the experiences she has encountered in becoming an African-American female writer. She uses unique humor and her own writing style to enlighten readers about the injustices she endured.

Depression is a disorder of mood, so mysteriously painful and elusive in the way it becomes known to the self-to the mediating intellect-as too verge close to being beyond description, It thus remains nearly incomprehensible to those who have not experienced it in its extreme mode, although the gloom, "the blues" which people go through occasionally and associate with the general hassle of everyday existence are of such prevalence that they do give many individuals a hint of the illness in its catastrophic form.

Famous American writer William Styron discusses his journey with depression through this short memoir found in Vanity Fair. Nearly committing suicide, he accounts his journey through depression and finding a way back out.

Micro memoirs come in all varieties since they explore life experiences. Take a walk with the author through these examples of short memoirs that explore sad subjects like grief and loss.

After Life by Joan Didion

Life changes in the instant.

You sit down to dinner and life as you know it ends.

The question of self-pity.

Those were the first words I wrote after it happened.

Take a walk with Joan Didion as she explores the feelings of loss and grief that she experiences after losing her husband. Through this micro memoir, you are taken on a heart wrenching journey of life after loss.

I Was Pregnant and Then I Wasn't by Laura Turner

When someone you know and love dies, your life changes, and it is the change that fuels your grief. You can't call them or see them like you used to; you can only smell their cologne on the clothes that still hang in their closet. But when it's a fetus that has died, or a baby, or whatever you want to call it, your life doesn't change, and that's the strange part - because it was supposed to.

In her devastating account of loss, Turner explores her grief over a child that she'd never met. She explores the devastation and grief that mothers face for a child that will never be, giving readers a clear look at miscarriage loss.

Emotion is a key player in most flash memoirs since they are a part of the human experience. Take a look at how these writers use humor to explore a small moment in their lives.

In the summer of 1987, my father tried to murder me with an alligator. He was always doing fun stuff like that, to see if we would die. Sometimes, he tried to murder us with other things, like gasoline, when we'd say to our Pop, "The leaves won't burn."

This flash memoir, published in Outside, tells Key's account of swimming with gators on a fishing trip where a precious rod is lost. Key uses the hilarious situations to explore the dangerous life of boys.

Me Talk Pretty One Day by David Sedaris

The teacher killed some time accusing the Yugoslavian girl of masterminding a program of genocide, and I jotted frantic notes in the margins of my pad. While I can honestly say that I love leafing through medical textbooks devoted to severe dermatological conditions, it is beyond the reach of my French vocabulary, and acting it out would only have invited unwanted attention.

Humorist David Sedaris includes a series of short memoirs in the book Me Talk Pretty One Day. This hilarious story recounts his move to France and his experience with a rather sadistic French teacher in college.

Finding inspiration and learning from others' experiences is what really draws a reader to memoirs. These inspiring autobiography examples really hit the mark.

Adventures in Depression by Allie Brosh

It's disappointing to feel sad for no reason. Sadness can be almost pleasantly indulgent when you have a way to justify it - you can listen to sad music and imagine yourself as the protagonist in a dramatic movie. You can gaze out the window while you're crying and think "This is so sad. I can't even believe how sad this whole situation is. I bet even a reenactment of my sadness could bring an entire theater audience to tears."

Using her own words and a series of images, web comic Allie Brosh gives her flash memoir a unique feel as she explores her bout with depression. Through her words, Allie gives you a keen understanding of the feelings that those with depression feel by telling of the real struggle inside the sufferer's head.

My Family's Slave by Alex Tizon

After my mother died of leukemia, in 1999, Lola came to live with me in a small-town north of Seattle. I had a family, a career, a house in the suburbs-the American dream. And then I had a slave.

In his memoir featured in The Atlantic in 2017, Tizon talks about the woman who raised him and his family for 56 years without getting paid. He discusses his relationship with Eudocia Tomas Pulido, a Filipino woman that became a slave to his family and a mother to him.

I Had a Stroke at 33 by Christine Hyung-Oak Lee

In this BuzzFeed published memoir, Christine Hyung-Oak Lee accounts her struggle with having a stroke at a young age. She recounts the stroke and the hole that it created in her memories, along with how she has worked to overcome this challenge. She also discusses how the near-death experience gave her a new outlook on life.

While some people might think that a mini memoir is just a personal essay, the two do have some unique distinctions.

Flash memoirs give you an intense thrill ride through a short moment in a person's life or a memory. They have a heavier emotional context and impact for the most part. The memoir writer is trying to illustrate something they learned or experienced through their personal experiences.

Personal essays, on the other hand, are written based on a theme, but typically summarize the theme through personal insights rather than delving deeply into a memory.

A Big Impact in a Small Package

Short memoirs pack a powerful punch. Through surprisingly few words, a writer is able to take you on a wild ride with them. You might gain inspiration, laugh, cry or all three in this unique writing genre. Short memoirs not your cup of tea? Try reading a few descriptive essay examples.