The most basic construct for English sentences is subject + verb + direct object. For example, “Marie walked home.” There, we understand the subject of the sentence is a girl named Marie. The action she’s carrying out is indicated by the verb “walked.” And, as for the direct object, or the thing that’s receiving the action of the verb, we see it is “home.” Marie walked home. That’s a complete thought, brought to you by the most powerful and necessary parts of speech.

So, when we take a look at simple future tense examples, you won’t be surprised to hear they’re dealing with verbs that indicate something taking place in the future. And, because they’re simple, there’s very little conjugation or complexity involved. Let’s take a look, shall we? 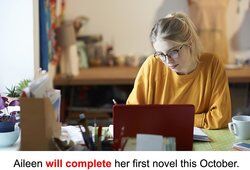 Learning how to conjugate a verb is tricky in any language. As for English, when you see the word “simple” in the title, you can take a deep sigh of relief. These verb forms are just that - simple. They deal with the present, past, and future in a straightforward manner.

Using the Helping Verb “Will”

Did you notice anything different in the future tense example above? It differs slightly because it commonly requires the helping verb “will.” After all, you’re predicting something that will happen (not something that already happened or is currently happening).

In this manner, the simple future tense will always follow that will + verb construct.

Yet, there’s another way to indicate the future tense. You can also simply add an “S” to the end of the verb. An example would be, “Meditation starts at eight o’clock.”

Here, you’re still indicating something is happening in the future. However, you’re not locked into the helping verb “will” anytime you want to discuss the future. In this example, if you chose to use the helper “will,” it would read, “Meditation will start at eight o’clock.”

What’s the difference between the two? It’s a matter of semantics. That is, if you’re 100% sure meditation will start at eight - and there’s no wavering about it - use the helping verb “will.” It’s more definitive. When you want to speak blanketly about a future event, simply tack on a “S” to the end of the verb.

Using “Going To” in the Sentence

Finally, there’s one more construct for the simple future tense. It’s used to indicate our pending hopes, dreams, and plans. It follows this formula: am/is/are + going to + verb.

Saying, “I’m going to…” is quite common in everyday language. And that’s just the point. It’s better-suited to casual conversation. If you’re writing an informal piece or an essay for school, you’re better off using the will+verb construct.

So, there you have it. The simple future tense comes about in one of three ways. Use the helping verb “will,” add an S, or use the “going to” construct. Let’s take a look at a couple variations that flow seamlessly into each construct.

Adding “Not” for Negation

Of course, what if any of these things are not going to happen in the future? Then, that’s the very word you must insert into the construct: “not.” The formula will read will + not + verb or am/is/are + not + verb. Let’s transform a handful of the examples above into the simple future negative form. (Note: This does not apply to the S constructs.)

Finally, we’re free to use the simple future tense when posing a question about the future, too. The same rules apply. You’ll use the helping verb “will” or the construct “going to.” The formula shifts slightly in that it’ll either read will + subject + verb or am/is/are + subject + going to. (Note: Like the negative form, this does not apply to the S constructs.) Here are two examples:

Who Runs the World?

Verbs. Verbs run this world because, without them, things would be far less clear. We wouldn’t know who is performing what action, and we certainly wouldn’t know when they happened.

Thankfully, verbs can be transformed into past, present, and future tenses, providing us with a lot more information. If you’d like a simple printout on these shapeshifters of the English language, download our printable covering 15 different classifications.