What Are the 5 Types of Imagery in Literature?

Whenever we read a book, we’re transported to other places, other times. We feel as though we’re standing alone on the cobbled streets of Edinburgh or sipping tea from the top of Mount Fuji. But, it’s so much more than a picture in our mind or an imaginary sound. 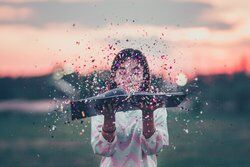 Visual imagery is the most common form of imagery in literature. At its core, every story has five elements: introduction, rising action, climax, falling action, and resolution. Tied into each of those elements are vivid images of the characters and the scenery, making visual imagery not only common but paramount.

Here’s a lovely example of visual imagery from Charlotte’s Web by E.B. White:

In the hard-packed dirt of the midway, after the glaring lights are out and the people have gone to bed, you will find a veritable treasure of popcorn fragments, frozen custard dribblings, candied apples abandoned by tired children, sugar fluff crystals, salted almonds, popsicles, partially gnawed ice cream cones and wooden sticks of lollipops.

Science has proven our sense of smell is our strongest link to the past. A single whiff of our mother’s favorite flower can take us back in time. To no surprise, authors want to tap into some of that.

So, when the main character of a novel walks into his mother’s kitchen and catches the buttery scent of scones dancing through the air in salutation, don’t be surprised if that scene takes you back to your Nana’s kitchen stool from your childhood.

Patrick Suskind’s novel, Perfume: The Story of a Murderer, is based on a main character who has a supernatural sense of smell. Suskind takes us on an amazing olfactory ride in this excerpt and throughout the entirety of his novel:

Gustatory imagery has to do with our taste buds. After you stop sniffing those scones, you’re going to want to sink your teeth into one. It's all about your sense of taste.

Hopefully, the author will continue to take you down this sensory highway as you imagine biting into one of those warm scones while the mixture of flour, butter, and strawberry jam dances a jig upon your tongue. If you’re lucky enough, you’ll even wash it down with a sweet sip of honey lemon tea. All in your imagination, of course.

You wouldn’t think the taste of dirt would be an author’s go-to. But, Gabriel Garcia Márquez is well-known and beloved for a reason. He takes us to new and exciting places. Note the saltiness of the tears and the bitter taste of the earth in this passage, taken from One Hundred Years of Solitude:

On rainy afternoons, embroidering with a group of friends on the begonia porch, she would lose the thread of the conversation and a tear of nostalgia would salt her palate when she saw the strips of damp earth and the piles of mud that the earthworms had pushed up in the garden. Those secret tastes, defeated in the past by oranges and rhubarb, broke out into an irrepressible urge when she began to weep. She went back to eating earth. The first time she did it almost out of curiosity, sure that the bad taste would be the best cure for the temptation. And, in fact, she could not bear the earth in her mouth. But she persevered, overcome by the growing anxiety, and little by little she was getting back her ancestral appetite, the taste of primary minerals, the unbridled satisfaction of what was the original food.

Tactile imagery reaches out to our sense of touch. Perhaps a shop clerk in Ireland will envelop his customer in a handmade cashmere wrap while the silky wool breezes against her arm in a whisper of softness.

Or, maybe that same character will take a walk through the Scottish Highlands and lose her balance as she hops across a stream and brushes against thorny brambles that scratch and claw at her skin.

Let's take a look at everyone's favorite American - Forrest Gump. Before Tom Hanks made it a blockbuster hit, Winston Groom wrote the captivating novel by the same title. Don't let all the typos fool you. That's just Forrest being Forrest. Note, however, the "stinging" rain and how it might feel when it comes down sideways:

It commenced rainin one day an did not stop for two months. We went thru ever different kind of rain they is, cep'n maybe sleet or hail. It was little stingin rain sometimes, an big ole fat rain at others. It came sidewise an straight down an sometimes even seem to come up from the groun.

Finally, auditory imagery appeals to our sense of hearing. Perhaps a happy couple will scoop their newborn puppy up in the middle of the night because his yipping was tearing at their eardrums - and their hearts.

And, when they take the pup for a walk outside, the chilly fall air will whisper along their cheeks as they crunch the leaves along the sidewalk, brace against the screeching winds, and shield themselves from the buzzing city sounds around them.

Here’s an example of auditory imagery. The screaming fowls and beating surf all but take us there. Enjoy this excerpt from Herman Melville’s Moby Dick:

Now small fowls flew screaming over the yet yawning gulf; a sullen white surf beat against its steep sides; then all collapsed, and the great shroud of the sea rolled on as it rolled five thousand years ago.

Who needs a blockbuster movie to take us on a sensory ride? All you have to do is crack open a book to dive in worlds untapped. Before you know it, all five of your senses will take a lightning rod ride down the imagination highway. And don’t let the journey end at the end of a chapter. Allow poetry to do the same with these examples of imagery poems.

The writing on the pages doesn’t only reach out and grab readers by the heart. It also tickles our taste buds, igniting a longing for Nana’s scones while mimicking the feel of a cool breeze beside a streamlined in daisies. For more, enjoy these examples of imagery conjured up by the likes of Charles Dickens and J.K. Rowling.