What Is Fake News? Simple Definition and Examples

That’s quite a statement. Could the news outlets we rely on day in and day out actually be an enemy of the people they serve? What is fake news? Together, let’s explore an issue that seems to be more and more pervasive as time goes on. 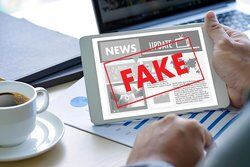 Fake news is a form of propaganda that consists of deliberate misinformation, usually intended to smear someone’s image. Typically, fake news stories are generated to sway people’s views, push a political agenda, or cause confusion around an important issue. This is not a new term. In fact, it’s been around since the birth of the free press. A freedom from censorship opened the door to the promulgation of falsehoods.

However, fake news has never been more sensationalized than in recent times. The spark that lit this fire was the election of Donald J. Trump as President of the United States. It polarized the nation, leaving many people to stand firmly on the left or firmly on the right, with very little middle ground.

What Impact Does It Have?

The introduction (or reintroduction) of fake news into society has had a detrimental impact on Americans’ faith in journalism. As of April 2018, only 41% of adults trust local news to tell the truth. Worse than that, only 27% of adults trust national news to tell the truth. The polarization of the nation during the 2016 election inarguably did a lot of damage.

In fact, many people feared the fake news articles posted on Facebook swayed the results of the election. CEO Mark Zuckerberg even had to testify before a joint Senate Committee to answer for these alleged crimes.

Harvard has laid out a set of guidelines that will help you spot a fake news story. It’s very important to form your own opinions, based on your own research. Harvard suggests everyone should vet a publisher’s credibility first and then check all the sources and citations. Another indicator is poor writing quality. If the journalist uses all caps or dramatic punctuation, remember that a reputable outlet would never let something like that fly.

With a firm understanding of fake news, let’s take a look at a few examples.

You’ll notice that some instances are purely comical, like Melania Trump hiring a body double. Other instances could’ve ended in a blood bath, as in the pizzeria in Washington, D.C. that was attacked as a result of a fake news story. Mistruths are never to be taken lightly, especially when they take center stage in the media.

One thing to note about fakes news is that you can't label something fake news just because you don’t agree with the story. This is precisely the type of thing that will turn it into a he said/she said match and confuse the public.

Is an entire article subject to the “fake news” label if merely one item of information is incorrect? What about the honest mistakes that journalists fall prey to from time to time? Unfortunately, in the present climate, that’s entirely possible. Even if the intent to mislead the public isn’t present, the fake news term gets flung with such frequency that anyone is likely to get attacked.

As you ingest news from various outlets, be sure to read, watch, or listen widely. Don’t rely solely on one source. Truth is, fake news extends all the way back to the birth of the free press. It’s not something we can characterize by one administration.

However, in this heated climate, the term has moved to the forefront of common vernacular. Together, let’s work to expunge fake news. Study your sources carefully. Question anything you read online. Cross check reports across other outlets.

What do you say we work toward a more respectable society that hinges upon honest reporting? Here are some tips on how to write a news report with honesty and integrity. We hope to “see” you out there.