Self-reflection might seem like a no-brainer when you start a reflective paper. But, delving into your thoughts and experiences is harder than you might think. Learn what a reflective essay is and how to write one through a few examples. Plus, explore several topics to get you started. 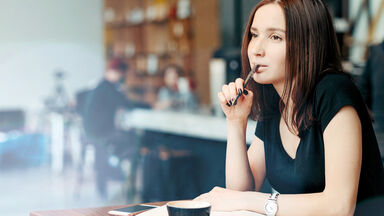 What Is Reflective Writing?

Reflective writing is a form of creative writing where you examine an experience or situation through self-reflection. Through the course of creating the reflective paper, you describe insights that you gained or express your views on some experience. Reflective essays are typically personal writings about an experience, but they can be made up as well.

Self-reflection is a personal experience. Therefore, the tone and voice of the writing are personal as well. Written typically from a first-person point of view, these types of essays take the reader through a journey of growth and discovery.

The structure and format follow a typical essay writing outline. Begin with a great hook and a strong introduction. Pull the reader in without giving too much away, then provide a quick overview of the reflective topic. Next, in the body of the essay, move into the meat of the paper by describing your experiences and growth. Round out your writing with a solid conclusion that concisely restates what you learned.

Now that you have an understanding of what it takes to write a reflective essay, check out a few examples for inspiration.

This essay example is written at a middle or high school level, reflecting on the arrival of a younger sibling.

In my short life, there are many experiences that could qualify as life-changing. Every new experience was, at one time or another, the first experience. For good or bad, each instance changed the course that my life has taken. But, the most transformative experience was the birth of my youngest brother.

Joel is someone my parents often call a happy accident. At the time that my mother became pregnant, I was 13, and my other brother, Jake, was 10. We were what you would call a well-rounded, perfect family of four. We neatly fit into the perfect classification in nearly every way. We didn't realize what we were missing until the moment that my youngest brother first opened his striking blue eyes.

In truth, I resented the fact that I would be having another sibling. Nothing needed to be added to our family, and my mother, already 38 at the time, was considered high risk because of her age. The pregnancy itself was full of complications that sent the straight course of my life into rollercoaster-like loops that my 13-year-old mind had a hard time comprehending. But now, I can see how forging through those loops helped me to roll with the punches that life inevitably brings

The day Joel was born, my mother took me with her to the hospital rather than my father. It wasn't a planned move, but Jake and my father were both feverish; I was the next best alternative. Sitting with her through every contraction, I gained a new respect for just how powerful and strong a woman could be in what might be considered their weakest moment. Holding her hand and feeding her ice chips, I gained a connection with my mother that I didn't realize we were lacking.

The moment my new baby brother came into this world, I realized two things nearly simultaneously. First, you don't realize how much you need something until it's sitting in your lap. Second, my life after this moment would never be the same. The moment he curled his chubby little finger around mine, I understood the words "happy accident" completely.

There are many different experiences in life that have changed a part of me as a person. But, nothing so profoundly changed my views and outlook on life like the birth of my youngest brother. Joel's arrival was a life-altering event that caused me to see the world through new eyes.

This reflective essay example about a favorite book is something you might find at the middle or high school level.

When it comes to books, I didn’t understand the appeal. I’d read one after another for each assignment not understanding what all the fuss was about. However, the moment I read Pride and Prejudice, it was like my literary eyes opened for the first time. It stirred love within me for classics I didn’t realize could exist.

When I was first given the assignment of reading Pride and Prejudice, like many of my friends, I scoffed. With an eye roll, I internally calculated how much time I would have to read the book and write a report. I sighed at the loss of time with my friends for a stupid classic.

Cracking open the cover, I was determined to hate it before even reading the first words. By the time I reached page 3, I nearly called it quits. But there was something about Elizabeth Bennet that quietly piqued my interest. I can’t say where, but somewhere along the way, my eyes devoured the pages instead of trudging along.

The moment I reached the end, I was ecstatic and disappointed at the same time. Their ending had been perfect, but I realized I would miss them. Not only them, but I would also miss being part of their world.

It was the first time characters of a story had affected me this way, so I tried to shake it off. However, after several days, that sadness carried me to the classics section of the school library. The moment I cracked open my next classic, my soul instantly felt more at ease, and I’ve never looked back.

I never thought I’d say a book changed me, but in this case, it’s true. The love I found in Pride and Prejudice introduced me to a beautiful world of classic literature I can’t imagine living without. Despite not reading Pride and Prejudice for a while, it will always be my favorite book.

This reflective essay example about the topic of creative writing is what you might expect to see at the college level.

I’ve always felt I excel in written communication. The skill of effectively communicating my thoughts and feelings through words and expressions seemed to come easily to me. However, I didn't realize how much my writing was lacking until my thoughts and feelings on writing were pushed nearly to their breaking point through my creative writing course.

Learning the best way to manage time was a huge hurdle for me. I've always been a procrastinator. However, after the first day of class, I realized I would need to modify my thinking and approach to homework. I wasn't able to completely kill the procrastination habit I developed in high school, but I did learn some much-needed time management skills. I also learned how writing without the looming cloud of a deadline could open a creative door.

A natural thinker and writer at heart, I thought I understood creative expression and wordplay... until my professor handed me my first grade. Upon looking at that striking "D" on the paper, I realized I would have to push myself harder and explore the depths my writing could reach. Not only did I learn to sharpen my technical writing chops, but I have found out how to dig into my creative soul to view my emotions and experiences in a whole new way.

Going beyond the five-paragraph essay and fully exploring my feelings about a situation or action was challenging. This creative writing class pushed me to realize there isn't a limit on words when it comes to expressing something. I can convey a simple action a million different ways, and I mastered how to explore each one to find perfection in my written words. I also picked up new flexibility in my writing by opening my mind to different scopes of expression.

Expressing all the changes that this class wrought in my writing is truly difficult. But, over the course of the eight weeks we spent together, I became a more competent writer. Not only do my words contain more depth and soul, but my writing itself has entered a whole new arena I didn't realize was possible. By studying new techniques and researching other approaches, I now have a sturdy foundation and a robust writing arsenal for future endeavors.

Half the battle in creating a great reflective paper is finding the perfect topic to write about. Your topic should be something that you experienced, learned, or grew from. It could also be a topic that requires you to think more deeply about a place or book.

Some fun, creative topics for self-reflection include:

The Art of Self-Reflection

Reflecting on a personal experience might seem like an easy essay to write. However, to ace your reflection paper, dive deeply into your feelings and choose a topic that triggers a strong emotional response.

If a reflective essay doesn't fit you, try exploring more about argumentative essays, including tips for making a compelling argument.