Satire is the use of humor, irony or hyperbole to critique something or someone, particularly in the context of political or social issues. Satire isn’t just as old as literature: It’s as old as communication itself. For as long as humans have been speaking, we’ve been satirizing what we have to say or what others have said. 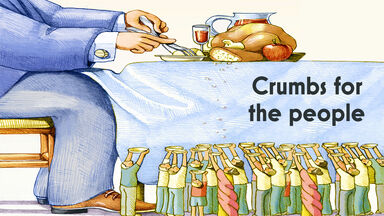 Many Faces of Satire

Satire is used in many works of literature to show foolishness or vice in humans, organizations, or even governments — using sarcasm, ridicule or irony. In particular, satire is often used to comment on and even influence the political or social events of the time.

Satire is a broad genre, incorporating a number of different approaches. It is sometimes serious — acting as a protest or to expose — or it can be comical when used to poke fun at something or someone. Some satire is explicitly political, while other examples of satire in literature, film, TV, and online take on a wider variety of topics.

Political satire is one of the most common and significant forms of satire. It can take the form of scathing comedy or parody or take a more direct approach to criticize individuals or entire governments. Creators have used many forms of media over the years to comment on politics, including newspapers, songs, art, movies, TV shows, and more.

A Modest Proposal by Jonathan Swift

Jonathan Swift was a political essayist and satirist who often used dark humor to convey political points. This is perfectly demonstrated in his 1729 essay “A Modest Proposal.” The “modest proposal” in question refers to the economic hardships of the Irish at the time and Swift’s satirical “proposal” that the children be sold as food to rich gentlemen and ladies. This shockingly morbid essay caused quite a stir when it was published because of how Swift used satire and hyperbole to criticize the British treatment of the Irish.

The satirical newspaper The Onion models its voice after the Associated Press and parodies real headlines by giving them a humorous spin. The satirical stories can range from local news to international political affairs.

Comedy has been a tool to criticize politicians and current events for thousands of years. A recent example of political satire with a comedic bite is The Daily Show on Comedy Central, which began with Craig Killborne in 1998, with Jon Stewart taking over as host the following year and Trevor Noah succeeding him in 2015. The Colbert Report starring Stephen Colbert was a spin-off of The Daily Show that similarly satirized the news, with Colbert inhabiting the role of a conservative pundit.

Examples of Satire in Literature

Satire has been a part of literature since the beginning of the written word.

Charles Dickens used biting satire in many of his novels, but Hard Times is perhaps the most significant example. The book takes a brutally honest look at English society and its economic and social inequality in the 19th century. The story follows Thomas Gradgrind and his family in the industrial town of Coketown. As the reader follows them through hard times, Dickens draws their attention to the inequality and effects of industrialization on the lower classes.

Catch-22 is a satirical novel that explores the absurdity of war. The novel follows several characters and storylines during World War II who attempt to maintain their sanity while fulfilling their service requirements. The story had such an impact that the term “catch-22” became part of our lexicon, used to describe a paradoxical situation or dilemma where there is no solution.

The Hitchhiker’s Guide to the Galaxy by Douglas Adams

Throughout his career, Douglas Adams used the tropes of science fiction and fantasy respectively to satirize modern life in all its aspects. Nowhere is this more apparent than in The Hitchhiker’s Guide to the Galaxy, which follows the misadventures of Arthur Dent, the last surviving man on Earth. In addition to satirizing science fiction tropes, Adams also critiqued the foolishness of people, organizations and governments.

Examples of Satire in Film and TV

Film and television both abound with expert satire. Comedy of all kinds has always been popular with movie and TV audiences, and satire, in particular, can feel all the more real and immediate when viewed on-screen.

Dr. Strangelove, directed by the legendary director Stanley Kubrick, takes a dark, absurdist look at the Cold War in the 1960s and the impending possibility of a nuclear attack that was a very real threat at the time.

Get Out is a horror film that takes a disturbingly satirical look at racial tension and inequality in 21st century America. When the main character Chris, a Black man, attends dinner at his white girlfriend’s family’s home, things take a sudden turn toward horror while also offering scathing social commentary

Consistent with its title, Black Mirror is a dark, futuristic take on satire, turning satirical narratives about the modern dependence on technology into stories of sci-fi dystopia and outright horror.

The internet loves to satirize everything, including itself. Many satirical publications can be found online, including the aforementioned The Onion. Additionally, many YouTube channels, forums, social media accounts, and more are dedicated to satire.

The hit YouTube series “Epic Rap Battles of History” satirizes both its historical subjects and the failures of history education, showing the simplistic, often biased narratives of social studies to be little more than C-list diss tracks.

The emergent “creepypasta” genre of horror often draws on pop culture and the unique qualities of the digital medium to achieve an effect both satirical and frightening, as in “Suicidemouse.avi” which is based on an old, unseen Mickey Mouse episode.

Creators have been critiquing society using humor since time immemorial. Satire is one way to do this, but there are other ways of making people both laugh and think.