Scientific Law vs. Theory: How Are They Different?

When reviewing scientific research or information about the world around you, it's important to know how to separate scientific law from theory. These closely related terms are similar yet not the same. Discover that both are equally important components of the scientific method as you explore scientific law vs. theory. 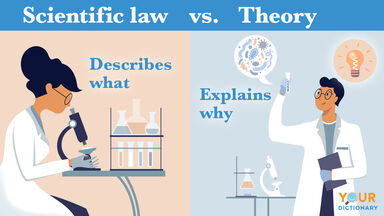 Scientific Law vs. Theory: What Is the Difference?

What Is Scientific Law?

A scientific law focuses solely on describing what. A scientific law provides a description of a directly observable phenomenon. It describes what will or is expected to happen in a certain set of circumstances.

What Is Scientific Theory?

What is a scientific theory explores why. A theory is about underlying causes, seeking to explain the reason the phenomenon occurs. The focus of a theory is to provide a logical explanation for things that occur in nature. There can be more than one theory about the same phenomenon.

Can a Theory Become a Law?

To easily tell the difference, remember that laws describe "what" and theories explain "why." Consider using a mnemonic device such as "look down towards Earth" to help you remember the difference.

Scientific laws are formed through repeated observations or experiments. They begin with a scientific hypothesis and are developed via scientific study that provides empirical information and data analysis. There are many examples of scientific laws.

Notice that each of the above laws describes a phenomenon, but does not seek to provide a reason that the phenomenon occurs. Providing an explanation of why is the job of theory, not law.

Scientific theories are formed via the scientific method. As with laws, every theory begins with a scientific hypothesis, which must be carefully researched. If there is sufficient evidence to support that the hypothesis provides a valid explanation for a phenomenon, the hypothesis can become a theory.

Notice that each of the above theories provide an explanation for a phenomenon that has been observed. Some are universally accepted, while others are under debate. They are not, however, just guesses or thoughts about possible causes for events. Instead, they have been thoroughly studied using the scientific method.

Now that you know the difference between a theory vs. scientific law, you are on your way to developing a strong vocabulary of science-related terminology. Continue exploring key scientific words by reviewing this collection of science terms made simple. Everything you learn will help you be better able to understand and discuss scientific concepts.