The three basic types of rocks are igneous, metamorphic and sedimentary. Sedimentary rocks make up most of the rocks on the earth and are formed when bits of rock, soil or organic matter settles and accumulates. Plant and animal fossils can be found in sedimentary rock. When there is an abundance of plants and animals, fossil fuels develop, like oil, natural gas and coal. Types of sedimentary rocks include carbonate rocks, chemically precipitated rocks, clastic rocks and coal. 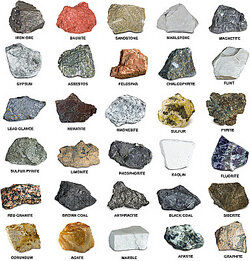 Chemically precipitated rocks are often formed when water evaporates and leaves minerals behind. For example:

Clastic rocks are made up of soil and tiny pieces of rocks called clasts. They accumulate and then are subjected to compaction and cementation. The soil and rocks are broken down my physical weathering, such as heat, ice, pressure and water. For example:

Other Types of Sedimentary Rocks

Sedimentary basins are areas where sedimentation occurred on a large scale. Examples include:

Different sedimentary rock examples can be found worldwide; but, the basic process that constructs the rocks remains the same.