Self-Fulfilling Prophecy Examples and the Psychology Behind Them 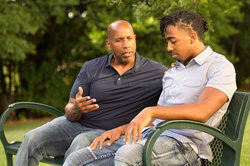 Self-Fulfilling Prophecy Examples and the Psychology Behind Them
Advertisement

Imagine a student, Jamie, is about to take a college entrance exam. She has spent lots of time preparing for the test. As Jamie is walking into the building to take the test, she gets a call from her dad. Her dad tells her she's always had a hard time with anxiety during tests and that she shouldn't be surprised if she doesn't get a good score.

When Jamie sits down to take the test, her heart is racing. She can't think and knows she's going to run out of time. She struggles through the exam. When she gets her score, it's lower than she wanted.

This is a case of an other-imposed self-fulfilling prophecy. Jamie's dad predicted her anxiety would get in the way of her achievement, and that happened because of his prediction.

In another imaginary example, a man named Ryan is getting ready to ask a woman for a date. Ryan has previous experience with rejection, and he thinks he sees a trend. He's sure the woman will reject him when he asks for the date, but he decides to do it anyway.

He walks up to her with his hands shoved in his pockets and his head down. Under his breath, Ryan mumbles, "I know you probably don't want to go out with me, but I'm asking anyway." Just as he predicted, she turns him down.

In this case, a classic self-imposed self-fulfilling prophecy, Ryan's own prediction turned out to be true. No matter how attractive he seemed to the woman he was approaching, his negative expectations for himself affected his body language and the way he phrased his request, making her more likely to refuse him.

Self-fulfilling prophecies happen in real life all the time. These real-world examples will give you an idea how they work.

In a study published in Education Next, researchers found that white teachers had lower expectations for the higher education success of their black students than they did for white students with similar profiles. Black students internalized these predictions and were less likely to attend college after high school because of them. This other-imposed self-fulfilling prophecy turned out to be true.

A study conducted at the University of Colorado Boulder found that patients who expect a painful experience are more likely to feel pain - even when the stimulus isn't very painful. Researchers used functional magnetic resonance imaging (fMRI) to measure the brain's response to stimuli when the subject expects the experience to be painful. The results showed that people experience more extreme pain because of that negative self-fulfilling prophecy, no matter what type of stimulation they receive.

Self-fulfilling prophecies can also affect the economy and people's economic decisions. A study published in PLOS One examined participants' economic risk-taking behavior when they were given a positive or negative economic forecast. Those who received a negative forecast were less likely to take risks and took longer to make decisions, resulting in lower profits during an economic game. The perception created by the economic forecast became a self-fulfilling prophecy.

According to a study at the University of British Columbia, when people perceive they are the victim of negative politics in the office setting, they tend to make decisions that make them more likely to be the target of politics. The paranoid behaviors that resulted from the perception of prejudice became a self-fulfilling prophecy.

The Psychology Behind Self-Fulfilling Prophecies

The American Psychological Association reports that there are many types of prophecies that bring about their own fulfillment. The reasoning behind this tendency is a little unclear, although there has been a great deal of research about it.

In general, a person's cognition, or thinking, affects his or her behavior. This is called a "schema." In some situations, this schema can go on to affect the situation, resulting in a self-fulfilling prophecy.