If you are looking to spice up your writing or public speaking and hold other people's attention, use the following sentence variety examples as a model. Adding variety to your speech or writing keeps people interested and can keep the emphasis where you want it. 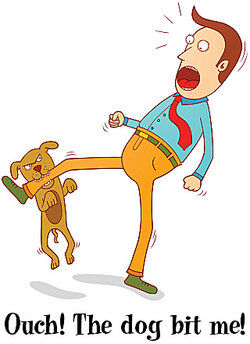 The dog bit the man.

Whether you're an ESL student or a native speaker of English, this is the first type of sentence you learn, and the most common in casual, everyday speech. In its simplest form it consists of a subject, a verb, and an object, and is often a statement of fact.

Did the dog bite the man?

Interrogative sentences are commonly called questions, and can be used for ascertaining facts or opinions. A subset of questions, called rhetorical questions, are not intended to provoke an answer; rather they encourage agreement or thought about a particular topic.

Ouch! The dog bit me!

An imperative sentence, also known as a command, leaves the subject implicit and focuses on the action (and the recipient thereof, if there is one). Imperative sentences are useful for persuasion and exhortation; manifestos and political propaganda make generous use of this type of sentence.

Sentences vary by structure as well as by function. The above examples were all simple; that is, they had one independent clause. There are also compound, complex, and compound-complex sentences.

A simple sentence has one independent clause.

A compound sentence includes more than one independent clause, connected by a coordinating conjunction (and, but, for, nor, or, so, or yet).

I prefer to read books that are bestsellers.

Although I prefer to read current bestsellers, I do like to read old Agatha Christie mysteries, and I also like some 20th-century science fiction.

Compound-complex sentences take a bunch of clauses (multiple independent clauses, and one or more dependent clauses) and toss them together like a salad. Although these sentences take practice to write in a grammatically correct fashion, they can hold a tremendous amount of meaning, and are common in academic writing.

Now that you know the different functions and structures that a sentence can have, you need to know how to combine them to have the impact you are looking for.

There are many ways to vary your sentences; play with variation until you are happy with your speech or writing.