Separation of Powers Examples in Government and Life 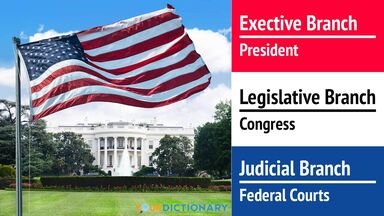 Separation of Powers in the U.S. Government

The United States (U.S.) government is a tripartite system of government, which means that it has three parts (referred to as branches). The three branches of the U.S. government are the executive, legislative and judicial branches.

The legislative branch of the U.S. government consists of the U.S. House of Representatives and the U.S. Senate. In combination, the House and the Senate comprise the country's Congress. This branch of government is tasked with legislating, which is the process of making laws.

The country's executive branch of government is tasked with carrying out the laws passed in Congress. It includes the president, vice-president, Cabinet members, and certain federal regulatory agencies.

Cabinet members, such as the White House Chief of Staff, Secretary of State and Secretary of Treasury (among others), are nominated by the president. Regulatory agencies include groups like the Equal Employment Opportunity Commission, the Department of Labor (DOL) and the Environmental Protection Agency, to name just a few.

The judicial branch is tasked with evaluating laws. It includes the Supreme Court and other courts that are presided over by federal judges. These courts make up the federal judiciary. While the Supreme Court (often referred to as SCOTUS) cannot make laws, it does have the power to overturn laws found to be unconstitutional.

SCOTUS members are nominated by the president and must be confirmed by the Senate. This is also how federal judges are appointed.

Balance of Powers in the U.S.

Even though the three branches of the U.S. government are separate, there are checks and balances in the system.

The U.S. governmental system is not the only approach to a tripartite system. Most have executive, legislative and judicial branches, though they are sometimes called by different names and are not always organized the same.

Austria's government consists of Parliament, the federal government and the administration of justice. Parliament is made of two chambers: the National Assembly and the Federal Council. The National Assembly handles federal laws, while the Federal Council focuses on the country's provinces. The federal government is led by a chancellor, vice-chancellor, and state secretaries and federal ministers. In Austria, all court decisions are made at the federal level. The Supreme Court is the country's highest judicial body.

In the Czech Republic, the executive branch includes a president and prime minister, along with Cabinet members. The president serves as the head of state while the prime minister serves as the head of government. The legislative branch is Parliament, which is made up of the country's Chamber of Deputies and Senate. The judiciary includes the Supreme Court, the Supreme Administrative Court and the Constitutional Court.

The president, prime minister (sometimes referred to as the premier) and the cabinet make up the executive branch of France's government. The Senate and National Assembly make up the legislative branch. France's judiciary branch is based on the Napoleonic Code. It includes a judicial branch and an administrative branch. The judicial branch deals with matters of criminal or civil law while the administrative branch deals with appeals related to executive decisions.

In India, the country's president leads the executive branch of government along with cabinet members and other officials. The prime minister is India's head of state. The legislative branch is the country's parliament, which is made up of the lower house (Lok Sabha) and the upper house (Rajya Sabha). The president is also considered part of parliament. The judicial branch consists of a tiered system of courts. The Supreme Court is the highest court.

The United Kingdom (UK) has executive, legislative and judicial branches, though there is a lot of overlap between the executive government and the legislature. In the UK, the executive branch includes the Crown (head of the royal family), the prime minister and the ministers (cabinet). Parliament is the legislative branch. It consists of the House of Commons and the House of Lords. The prime minister and most of the ministers are part of parliament, as is the Crown. The courts are the judiciary branch.

A bipartite democratic system of government has two levels of separation of powers. There is a group of elected representatives, or General Court, who in turn elect a governor. Several early American colonies used this kind of system, including Connecticut, Massachusetts Bay Colony, Plymouth Colony, and others.

Of course, governments aren't the only entities that make formal decisions about how power should be divided. Examples of separation of powers can be seen in organizations and relationships alike.

Many Options for Separation of Power

There are many separation of power examples in government and life. It's important to be knowledgeable about how the government works where you live, as well as how power is separated in any organizations that you may be involved with, such as a team, school, business, or even family. Now that you have seen how power can be split in different contexts among different people and groups, take the time to learn more about how government is structured. Start by exploring this simple breakdown of national government powers. Then, discover some examples of federalism in the U.S. Constitution.