When you think of a manifesto, you might think of a political change or a newsworthy artistic movement. But, anyone can have a manifesto. Learn what a manifesto is through a definition and several examples. Then, identify how to create a manifesto of your own. 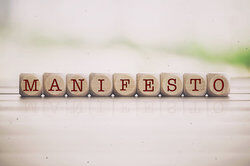 What Is a Manifesto?

In a manifesto, you declare your vision, core values and goals to the world. This might be a manifesto of a company, artist, person, movement or politician. Unlike a mission statement, a manifesto is a call-to-action that works to ignite the masses. One example that might instantly come to mind is the Manifesto of the Communist Party by Karl Marx and Friedrich Engels. However, manifestos come in all shapes and sizes.

The Purpose of a Manifesto

Manifestos create direction, focus and purpose. This can be important in both business and personal life. Not only do they clarify your beliefs but they help to explore your motives while creating policies and aims.

A manifesto discusses your personal goals in print and helps you to evaluate opportunities for reaching them. It can also show the world how you are going to contribute to the future you want to see.

The Benefit of Keeping It Short

Manifestos can be a few sentences or the length of a novel. While having a long, drawn out manifesto might include all your intentions and goals, a short, powerful manifesto of a few lines or a page can get your message across quickly.

Keeping it short also helps to ensure it will be read. In a quick fix world, where people spend less than 10 minutes a day reading, packing your message into a few lines is the way to go.

When it comes to short manifestos, there is a lot of variety out there. Some companies and artists pack their goals into a few lines. Others might use a page to declare the impact they want to make on the world.

Peruse through some different examples of short manifestos created by students, companies, artists, writers and more.

Our purpose is to unite the world through sport to create a healthy planet, active communities and an equal playing field for all.

Nike packs power into one line: “Purpose moves us.” Their revolving goal is a changing and moving effort to create an active planet. With their manifesto, Nike provides articles and inspiration on how the company is working to achieve their goals through their products.

Apple: To the Crazy Ones

Here’s to the crazy ones. The misfits. The rebels. The troublemakers. The round pegs in the square holes. The ones who see things differently. They’re not fond of rules. And they have no respect for the status quo. You can praise them, disagree with them, quote them, disbelieve them, glorify them or vilify them. About the only thing you can’t do is ignore them. Because they change things.

In this excerpt from their short ad manifesto, Apple demonstrates their commitment to people who think differently. They strive to push the status quo and invite imagination and creativity. This call to arms, so to speak, not only inspires but invites everyone to explore their thinking.

Holstee: This Is Your Life

This is your Life. Do what you love, and do it often. If you don’t like something, change it. If you don’t like your job, quit. If you don’t have enough time, stop watching TV…Life is about the people you meet, and the things that you create with them so go out and start creating. Life is short. Live your dream and share your passion.

When it comes to short manifestos, Holstee takes a unique approach by creating a visual appeal along with their goals. In their unique typographical poster, they show that their definition of success is finding passion in your life and achieving it. Not only do the words evoke powerful feelings but the creative layout bolds the important elements.

We believe in life.

We believe in living every minute of it with every ounce of your being.

And that you must not let cancer take control of it.

We believe in energy: channeled and fierce.

We believe in focus: getting smart and living strong.

Unity is strength. Knowledge is power. Attitude is everything.

Fighting cancer and living strong are the goals at LIVESTRONG. Their short one-page manifesto breaks down how they intend to help others to live strong and fight disease. This inspiring message of a few words is not soon forgotten.

In her personal manifesto on art, Sofia Gabriel shows how important art is to the community. Sofia uses thought-provoking wording to demonstrate that art is important because it brings us together.

In his manifesto, George Maciunas uses dictionary terms and handwriting to illustrate the Fluxus art movement. This 1960s and ‘70s movement emphasizes how art should be evolving and experimental. Rather than focusing on the product, you should look at the process involved in creating art or living art.

It starts by standing with the poor, listening to voices unheard, and recognizing potential where others see despair.

It demands investing as a means, not an end, daring to go where markets have failed and aid has fallen short. It makes capital work for us, not control us.

It thrives on moral imagination: the humility to see the world as it is, and the audacity to imagine the world as it could be. It’s having the ambition to learn at the edge, the wisdom to admit failure, and the courage to start again.

Acumen: it’s the radical idea of creating hope in a cynical world. Changing the way the world tackles poverty and building a world based on dignity.

Acumen is an investing company that works to help the poor and drive change. Through their short manifesto, you can clearly see their commitment to changing the world and their goals of helping the poor to be heard. The hope that they infuse in the wording strives to make readers want to make the world a better place.

Fashion Revolution: This Is Our Dream

We are Fashion Revolution. We are designers, producers, makers, workers and consumers. We are academics, writers, business leaders, brands, retailers, trade unions and policymakers. We are the industry and the public. We are world citizens. We are a movement and a community. We are you.

We love fashion. But we don’t want our clothes to exploit people or destroy our planet. We demand radical, revolutionary change.

This is our dream…

Fashion Revolution is a political movement to create a fashion industry that values creativity and inclusion. They use their short manifesto to discuss the 10 changes that they would like to see happen within the industry. Through this excerpt, you can see their passion to mold the fashion industry into a better, more environmentally-friendly place.

Mozilla: We Are Committed

We are committed to an internet that includes all the peoples of the earth — where a person’s demographic characteristics do not determine their online access, opportunities, or quality of experience.

We are committed to an internet that promotes civil discourse, human dignity, and individual expression.

We are committed to an internet that elevates critical thinking, reasoned argument, shared knowledge, and verifiable facts.

We are committed to an internet that catalyzes collaboration among diverse communities working together for the common good.

Creator of Firefox, Mozilla uses their short manifesto to clearly show the goals they hope to create and harness. Not only do they want to offer the internet to everyone but they want to see the internet push creativity and collaboration.

Believe in Success No Matter Your Age

Through a short manifesto, feminist literary company LiisBeth demonstrates their goals of advancing feminist literacy. Using creativity and thought-provoking wording, LiisBeth shows you their plan to create a platform to invoke change and social justice.

Creating Your Own Manifesto

A short manifesto doesn’t have to ignite a nation but it could. Tell the world your core values and goals that you hope to achieve in your personal, political or business life. Need some help identifying your core values? Examine a few examples of core values to get started!