Writing uses a lot of different literary devices to add fun. Analogy, metaphor, and simile are used to make comparison. However, how each one makes that comparison is slightly unique. Analogies compare two things to make a point while metaphors and similes make a more direct comparison. But that’s not the only difference between these three terms. Explore the difference between analogy, metaphor, and simile by looking at simple definitions and examples. 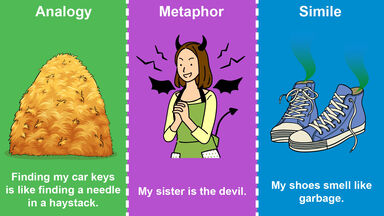 What Is an Analogy?

Writers love to make comparisons. Some of those comparisons really make you think. An analogy is a literary device that makes one such comparison.

While some analogies are easy to see, others take a bit of thinking. For example, ‘Talking to my sister is like shoveling before a snowstorm.’ Both tasks are useless, but you must think about it a little which makes it fun.

What Is a Metaphor?

Now, it’s time to look at metaphors. A metaphor is also a literary device that makes a comparison between two different things. But unlike an analogy, it’s a direct comparison. For example, ‘My sister is the devil.” Now, we know that your sister isn’t exactly the devil. However, the point made is that your sister and the devil are both evil. The rhetorical comparisons metaphors make can get deep too. Think about Shakespeare’s line, “All the world’s a stage.” One small sentence is questioning human existence in the world.

It’s always best to understand a concept by looking at visuals. Check out these examples of metaphors along with what these two things have in common.

With analogy and metaphor out of the way, simile is a piece of cake. Why? Because a simile is actually a metaphor. Therefore, it makes a comparison between two different things to create a dramatic effect. However, where simile is different from a metaphor is in the fact that it creates a comparison using the word like or as rather than making a direct comparison. For example, ‘My sister is evil like the devil.’ Similes can make the comparison a little easier because they tell you what the two things have in common.

Need a few more similes in your life to see how it’s different from a plain old metaphor? Check them out now.

Difference Between Analogy and Metaphor

Seeing the difference between an analogy and a metaphor along with a simile can be difficult without a direct comparison. Use this table to keep things clear.

As you can see, analogies are the most elaborate of the three literary devices, but all are used in writing to make a comparison.

Metaphor vs. Analogy vs. Simile in Writing

The thing to remember about analogies, metaphors, and similes is they all make comparisons. It’s how they do it that is a bit different. Did you have fun with similes? Then view a few more simile examples for kids. You never know where you might add them to your writing.